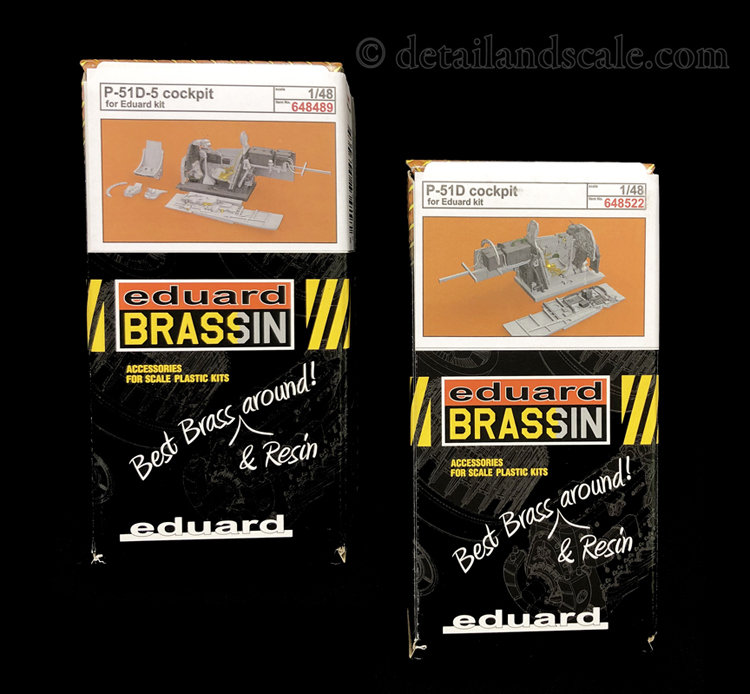 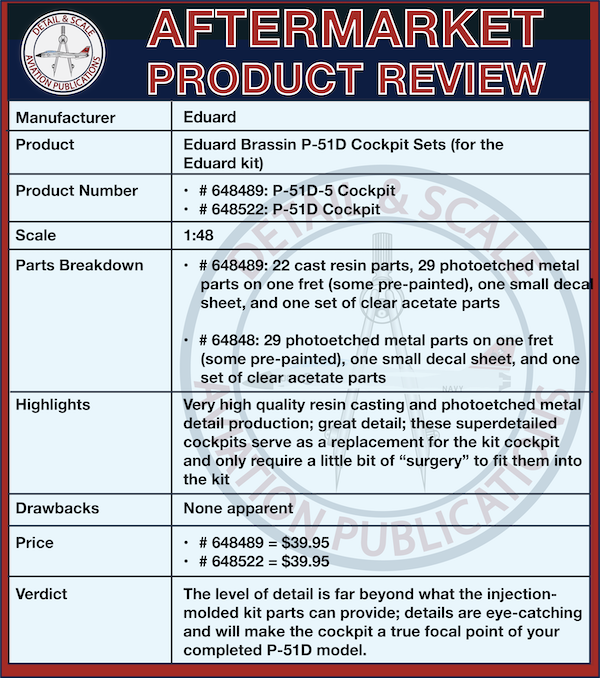 The cockpit of a model aircraft is often considered to be a “focal point” for both builders and viewers.  Eduard’s 1:48 scale P-51D Mustang has a decent cockpit for an injection-molded kit, and it can be made even better with some of their photoetched metal detail sets or items from their LOOK product line (you can find those reviews among other aftermarket detail sets for the Eduard 1:48 scale P-51D).  Yet, the ultimate in detail for the Eduard P-51D cockpit can be found in their Brassin superdetailed cockpit sets.  Here, we look at their P-51D-5 and P-51D cockpits.

Starting off, let’s take a look at Brassin # 648489: P-51D-5 Cockpit.  The early Block 5 production not only lacked the later tail fillet, but these P-51Ds had a slightly different cockpit configuration than later P-51Ds.  This set has the parts for this early version’s cockpit.  It contains 22 cast resin parts, 29 photoetched metal parts on one fret (some pre-painted), one small decal sheet, and one set of clear acetate parts.

This is a complete cockpit replacement for the Eduard kit.  It is mostly a drop-in set, with only very minor surgery (removal of the forward cockpit floor to be replaced with a resin version) required to make it fit in the kit.  This set contains parts for either the all-metal Warren-McArthur 243B-AS1 seat and the later Schick-Johnson 95-100 seat seen in various D-5s at different times (check your references!).  The set also provides a complete set of sidewalls, a new radio and battery, gunsight, two styles of fuel tank selector panels, the control column, rudder pedals, throttle, oxygen hose, the canopy brace, and lots more.  The cast resin instrument panel also features great raised detail, and the instrument dials themselves are represented by individually printed decals – a very good combination, indeed.  Other decals are provided to represent various data placards in and around the cockpit.

The photoetched metal detail parts here provide a set of pre-painted shoulder harnesses and lap belts.  The detail here is gorgeous, from individual stitching details on the belts to shading/depth effects and separate belt latches (very small parts there, so be careful).  Other PE parts are applied to various locations throughout the cockpit.  Clear acetate parts are provided for the gunsight glass.

This set largely covers the same territory in terms of parts as the previously discussed P-51D-5 cockpit set.   However, there are some additional elements here to cover the subtly distinct P-51D-10 and P-51D-15+ instrument panel and fuel tank selector panel configurations.  There is only one style of seat included here with the backpad.

Overall, these two cockpit sets are among some of the best Brassin products that Eduard has produced.  For those interested in doing an Eduard Mustang with a truly superdetailed cockpit, look no further.