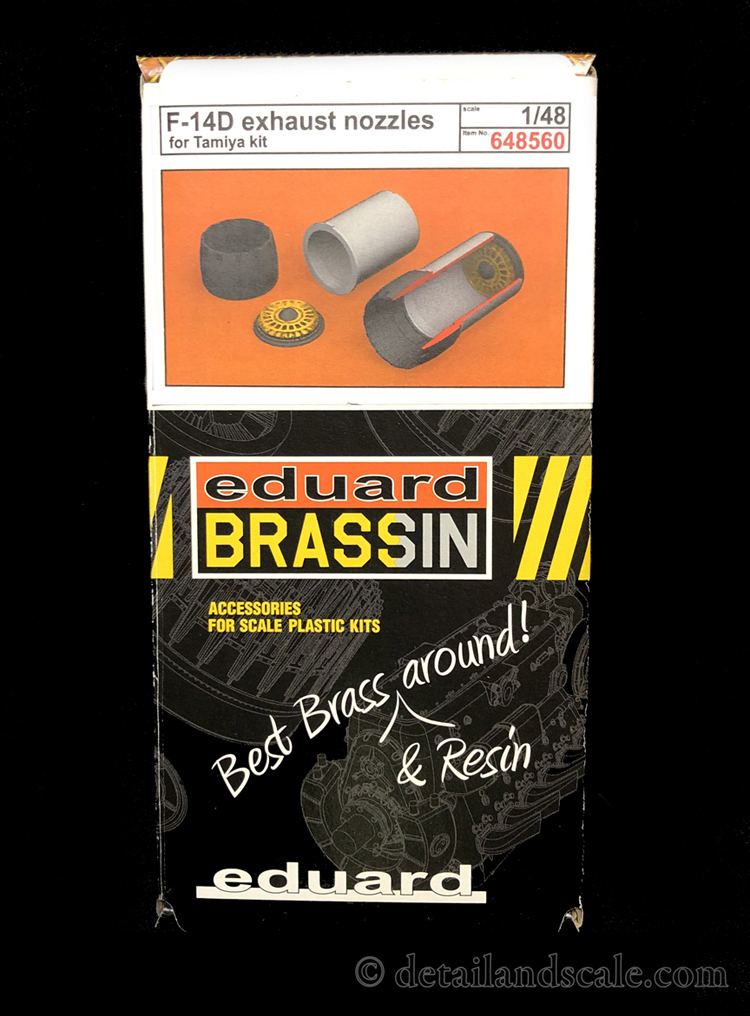 The General Electric F110-GE-400 was the definitive engine for the F-14 Tomcat.  It powered both the F-14B and F-14D.  The F110 offered greater power, range, fuel efficiency, and reliability than the Pratt and Whitney TF30 engines fitted to the much larger fleet of F-14As.  Tamiya’s 1:48 scale F-14D is a superlative Tomcat kit (and you can read our review HERE).  However, there are a few areas in which detail can be improved.  Tamiya’s exhaust nozzles for the mighty F110s are good for injection molding, but they are under-detailed, particularly concerning the interior nozzle surfaces, the afterburner cans, and the flame holder assemblies.

Here, the engine nozzles are depicted in the open position, appearing as they would be positioned when the jet would be in a powered down state, when it was taxiing, at idle, or in afterburner.  The detail is excellent, and it captures well what is absent in the Tamiya kit parts – specifically, the corrugated interior surfaces of the engine nozzles, the complex textures of the inner lining of the afterburner cans, the multi-layer fuel injector rings and flame holders, and the aft turbine faces.  It is all very impressive, and the casting is immaculate.  No modification of the kit is needed here.

One further – and very distinctive – highpoint of this Eduard offering is the inclusion of an extensive pre-cut masking set for the exterior engine nozzles.  One of the harder parts of depicting an open F110 engine nozzle correctly involves the darker coloration where the engine nozzle pedals overlap when the nozzles close.  These can be represented by decals but painting them is probably (or always!) the most realistic option.  These masks actually provide two optional masks. Depending on the order in which the builder prefers to lay down their colors, one set represents a positive mask and the other is a negative mask.

Overall, this F110 engine set looks great..with a few exceptions. First, one notable error is that the length of the exhausts (or afterburner cans). They are too short.  The problem here is that not all F110 exhausts are equal.  To fit into the airframe of an F-14B/D, a 52 inch-long extension was added to the standard F110 motor. So, what would be the correct length for an F-16C Block 30/40/50/60 (which is what we seem to have here) is too shallow and short for the F-14B/D.  If you know the F-14 relatively well, the difference is quite obvious when looking down into the tailpipes. Second, the surface of an F110 nozzle does have some very subtle rivet features which are absent here.