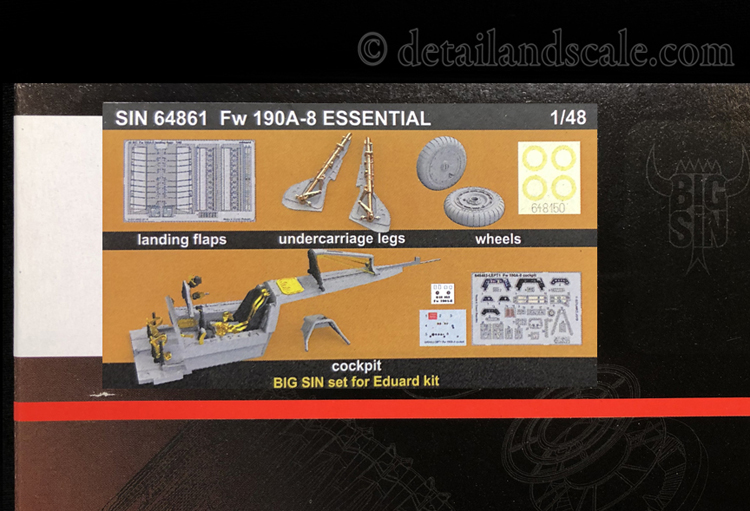 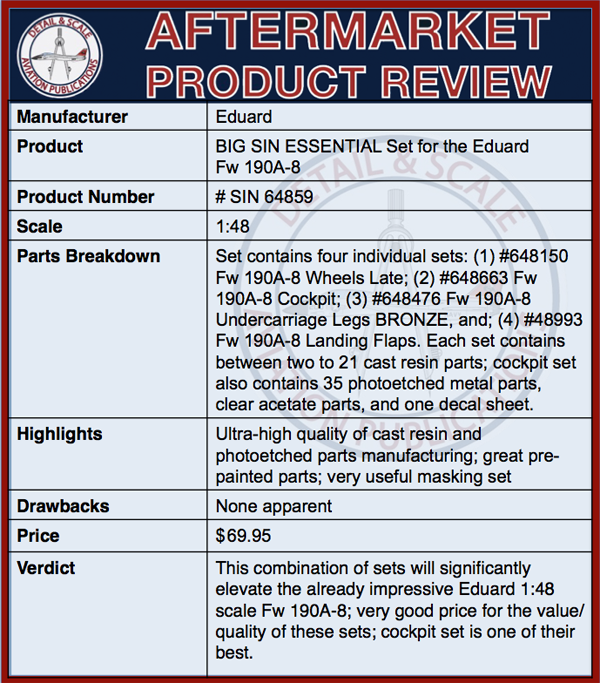 In 2019, Eduard released their 1:48 scale Fw 190A-8 as part of their expansive Fw 190 family of kits (see our review HERE).  As can be expected, and is quite often the case, Eduard has released a range of comprehensive aftermarket detail sets that can make their Würger kit even better.  Here, we take a look at Eduard’s BIG SIN set for this kit, and bundles multiple Eduard Brassin detail sets at a savings for the customer.

Starting with #648150 Fw 190A-8 Wheels Late, this Brassin set contains two cast resin parts – just the late war-style main wheels.  These are flawlessly made, single-piece resin castings.  The detail is excellent, down to the “Dunlop” imprimatur on the tire sidewalls and the bolt and brake assembly details on the hubs.  There’s also a pre-cut self-adhesive masking set included for the wheel hubs.  I use Eduard wheel hub masks whenever possible, as they make painting the wheels a breeze.

Next, #648663 Fw 190A-8 Cockpit:  The kit cockpit gets a lukewarm “okay” grade for detail, as Eduard anticipates most modelers will gravitate to their phototeched or even Löök detail sets, but the fullest adventure in cockpit detail you can get is their Brassin Fw 190A-8 cockpit set.  It is a complete replacement for the kit cockpit.

These Fw 190 cockpits are among the best that Eduard has ever done.  The Brassin Fw 190A-8 set contains 21 cast resin parts, 35 photoetched metal parts, one small sheet of clear acetate (gunsight glass), and one small decal sheet.  The resin parts span the cockpit tub and aft decking, pilot’s seat, instrument panel, instrument panel coaming, rudder pedal mounts, gunsight, and various other small cockpit details.  The molding quality and fidelity of detail is outstanding.  Many readers know from experience that most manufacturers’ resin cockpits take a good deal of work to get them to fit properly in a plastic kit, but this set is designed to drop right into the Eduard Fw 190A-8 with only the smallest of modifications to the sidewalls of the kit.

These great resin parts are complemented by the high-quality photoetched metal parts.  They add intricacy and accuracy from the rudder pedals to aft cockpit decking details.  Some of these PE items, such as the instrument panel parts and the shoulder harnesses and lap belts, are pre-painted.  The pre-painted items are beautifully done and subtly painted, and the overall quality of all these parts holds up to Eduard’s high standards of detail and accuracy.  A small decal sheet rounds out this Brassin set and contains some really impressive instrument faces that are more delicately done than any pre-painted PE part can achieve.

The next set, #648476 Fw 190A-8 Undercarriage Legs BRONZE, contains complete replacements for the kit’s main landing gear.  These come in the form of gorgeous cast brass left and right landing gear.  Not only are these very strong, the detail is also excellent, and includes conformally cast details such as the brake hydraulic line.  A cast resin set of main landing gear well doors round out this set.  They feature details, inside and out, that far surpass the kit door parts.

Last up:  #48993 Fw 190A-8 Landing Flaps.  One of the few critiques of the Eduard Fw 190 kits involves the lack of separate landing flaps in the kit.  However, landing flaps are provided here as a separate PE detail set.  The Fw 190A-8 landing flaps set comes on a single fret and contains 14 parts.  The photoetched metal parts are ideal to represent the depth, scale thickness, and detail that is in the trailing edge of the inside of the wing.

This one is not a “drop-in” detail set.  Integrating it into your Eduard A-8 kit will take some work.  There is some razor saw surgery that needs to be done on the fuselage where it meets the aft wing roots and removal of the entire lower landing flap from the kit’s lower wing.  The trickiest part of all of this involves removal of about half of the thickness of the inside upper surface of the landing flap of each upper wing half.  That’s a job for a sanding stick and watch the thinness of your trailing edge.  And of course, take your time and test fit PE Parts 1 and 2 along the way.  There’s also a good deal of folding of PE parts in this set.  I would highly recommend use of a “hold-and-fold” type tool for the job.  It might not be the most basic PE detail set ever, but it is your ticket to build your 1:48 scale Eduard Fw 190A-8 with its landing flaps deployed.

In sum, this BIG SIN set contains some great features and opportunities for detailing that can make your Eduard 1:48 scale Fw 190A-8 really shine – and saves the scale modeler some money in comparison to if each set was bought individually.