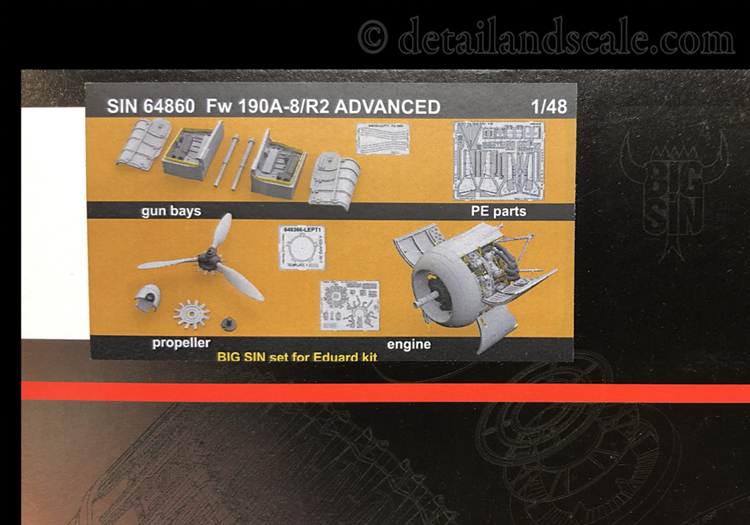 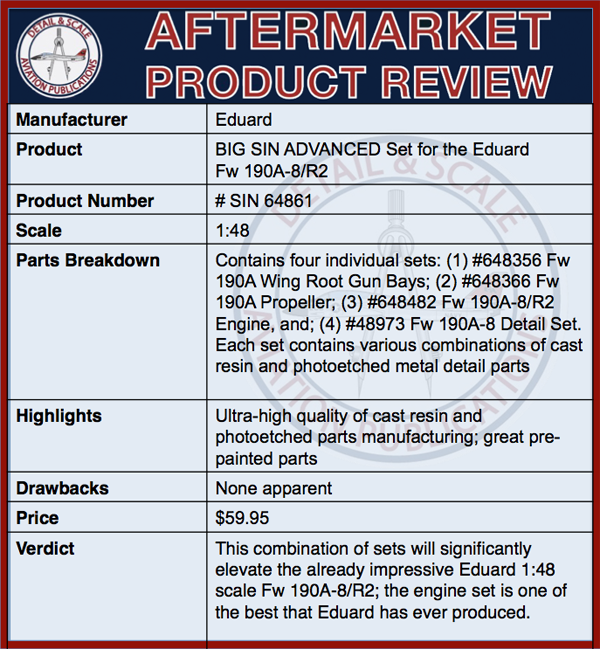 In 2019, Eduard released their 1:48 scale Fw 190A-8 as part of their ever-expanding Fw 190 family of kits (and see our review HERE).  As is standard procedure, Eduard has released a range of comprehensive aftermarket detail sets that can make this Würger kit even better.  Here, we take a look at Eduard’s BIG SIN ADVANCED set for this kit which bundles multiple Eduard Brassin detail sets at a savings for the customer.

First, #648356 Fw 190A Wing Root Gun Bays is a Brassin set that allows the builder to open up and detail the MG 151 20 mm cannon bays found in the Würger wing roots.  It features 10 resin parts and one fret of four PE parts.  The casting is exceptional and filled with some beautiful details, from the floor of the cannon bays to the raised and recessed details on the bay covers and the separate cannon parts themselves.  The PE parts serve to detail the inner frame of the bays and will do so to a very nice effect.

Next, #648366 Fw 190A Propeller is a simple but effective Brassin set.  It really does provide some great replacement propeller blades.  As they are cast in resin, these parts achieve a scale thickness at their edges that are more accurate than the plastic prop blades in the kit.  It also includes a fabulous cast resin prop hub, spinner, and a very handy (and effective) alignment jig to aid in the assembly of the propeller blades.

The centerpiece of the BIG SIN set is #648482 Fw 190A-8/R2 Engine.  Eduard has done some amazing WWII-era aircraft engines recently, including this spectacular Brassin engine set for the 1:48 Fw 190A-8 contains 22 cast resin parts and 62 photoetched metal parts on one fret.  The parts provide for a complete engine.  The BMW 801D-2/801-Q is represented in exquisite detail.  Casting quality is impeccable.  There are no flaws, errors, or defects anywhere in any of these pieces.  The parts breakdown effectively balances maximum detail with minimum complexity of construction.  Both cylinder rows are cast together as one piece and the relief and detail are striking.  Even the most miniscule details, such as some of the fine wiring and bolts atop the cylinder heads, are all there.  The gearbox and aft engine accessories (e.g., oil filters and associated gear) are no less impressive and are detail-rich and a real treat for the eyes just sitting there unpainted.  Other parts include resin parts that appear to capture the BMW 801’s complex network of exhaust pipes just perfectly.  The front of the engine cowl is also included in resin in far greater detail (both inside and out) than what the kit part provides.

There will be a little cutting necessary to open up the engine access panels, but the set includes replacement parts in resin that are both appropriately thin and beautifully cast with lots of detail on both their exterior and interior surfaces.  The engine mount is also included, and it is very well cast.  The photoetched metal parts provide many small but important engine details (e.g., various braces, plates, and cowling panel latches) but the ignition rings and wires dominate the fret.  Normally, I would opt not to use a two-dimensional PE part for a three-dimensional wire, but here, these are so elegantly done and so finely made that scale modelers truly could not do any better than this

Last, #48973 Fw 190A-8 Detail Set is an all-photoetched metal detail set containing 49 parts on one fret.  It provides various additional details to add to the 1:48 scale Eduard Fw 190A-8.  The most conspicuous parts here are the replacement PE main gear doors, and this set provides separate parts for both interior and exterior surfaces.  They are far superior in detail and scale thickness than the kit’s plastic gear doors.  Additionally, there are other multiple gear well wall details, wiring bundles, main gear brake lines, gear retraction arm details, and a few nice details for the cockpit, windscreen, and canopy.

In conclusion, this BIG SIN set contains some outstanding detail sets that will add truly advanced details to the Eduard 1:48 scale Fw 190A-8, and it and saves the scale modeler some money over buying each set individually.