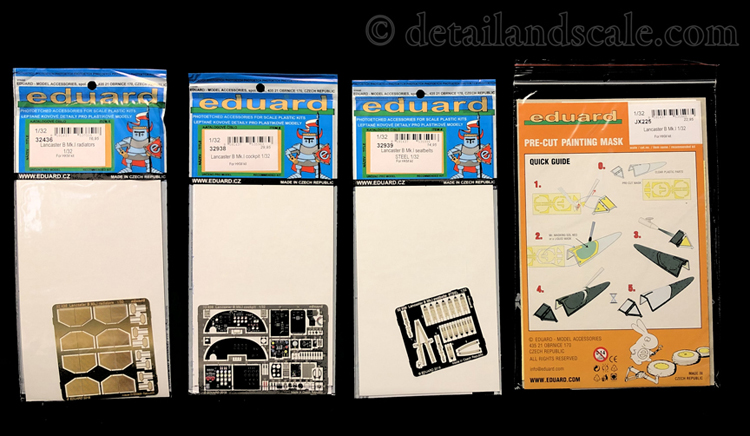 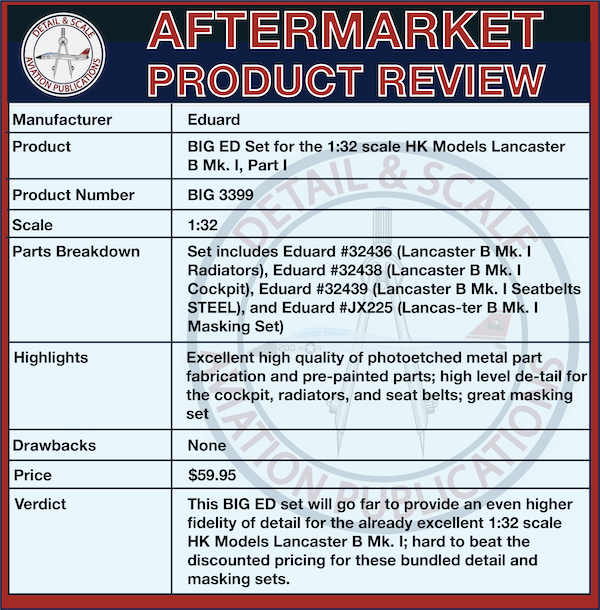 The 1:32 scale HK Models Avro Lancaster bomber made a huge splash when it was released in 2018.  It is a very big kit and filled to the brim with some excellent detail.  Eduard, naturally, released a number of detail sets for the kit, and here, we look at their first of two BIG ED sets for the HK Lancaster B Mk. I.  It bundles together (at a savings for the customer) their photoetched Lancaster B Mk. I Radiators, Cockpit, and Seatbelts sets, along with a pre-cut masking set.

#32436 (Lancaster B Mk. I Radiators).  This set consists of one photoetched metal fret containing 16 parts: the grills for the engine radiators and air intake scoop screens.  Parts quality is outstanding and far superior to the kit parts.  They are also pretty simple to use and will add a very high visual appeal to the Lancaster’s engines.

#32438 (Lancaster B Mk. I Cockpit).  This set features 51 photoetched metal parts spanning the instrument panel, flight engineer’s station, radios, and more.  Most of these parts are pre-painted, and the level of detail is stunningly good.  Some of the dials look a perhaps a little generic and not quite right in their appearance, but others appear to be absolutely spot-on.  In this large scale, it is important to get these features right, and for the most part, it looks like Eduard did a very faithful job here.  The instrument panel dial faces are treated with Eduard’s “raised glass” effect.  One of my favorite touches is the tiny PE aircraft indicator as part of the frame of the artificial horizon.  It’s delightful.  Other small parts include a navigation computer, various knobs, and the throttles.

#32439 (Lancaster B Mk. I Seatbelts STEEL).  In this set, you get 18 pre-painted belts for the various crew positions in the airplane, including the pilot’s shoulder harness and lap belts for everyone else.  Again, the quality of the PE metal parts is excellent, but the real draw here is the quality of the pre-painting.  It captures the subtleties of stitching details, clasps, buckles, and even shading effects to enhance the three-dimensional look of the parts.  It is technically excellent work that looks great, too.

#JX225 (Lancaster B Mk. I Masking Set).  There’s a lot of glass in the Lancaster’s nose, and the accurate masking and painting of these parts will take a lot of time and carries a hefty probability of imprecision. I used to always make my own masks and they never came out quite as desired in some spots.  Ever since I started using them some years back, I have become a big fan of Eduard masking sets.  Here, there are two BIG pre-cut self-adhesive masking sets for the very complex canopy glazing, other clear parts, and the wheel hubs.  This set will save the scale modeler a lot of time with their Lancaster, and the results should look fantastic.

In summary, this BIG ED combination provides these sets together at a lower price than if they were bought individually.  It also elevates the level of detail several degrees to what tis already there.  If you enjoy working with aftermarket detail sets, you will love this collection of sets for the great 1:32 scale HK Lancaster B Mk. I.