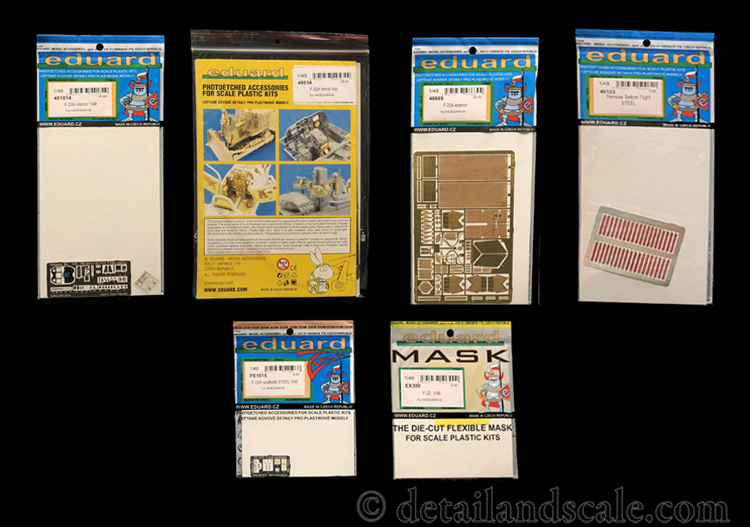 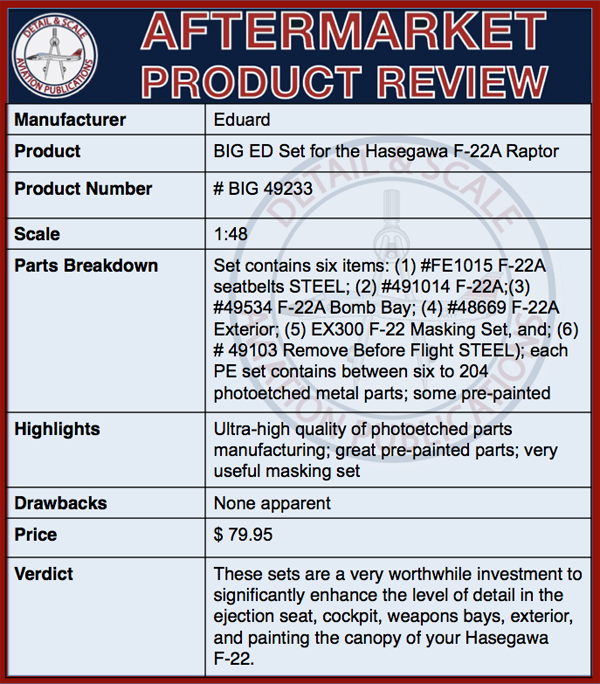 Hasegawa’s 1:48 scale F-22A Raptor kit stands out as the best in this scale.  It possesses a very good combination of detail and accuracy that certainly elevates it above the competition posed by Academy and Italeri.  Still, there’s quite a bit more detail that can be added in the pursuit of the most accurate Raptor you can build.  Eduard has released a number of photoetched metal detail sets over the years for the Hasegawa kit, and here, we take a look at their BIG ED set which bundles multiple Eduard detail sets at a savings for the customer.

First up: # FE1015 F-22A seatbelts STEEL.  The ACES II ejection seat in the Hasegawa F-22 kit is pretty short on details.  This includes a total lack of harnesses and restraints.  Here, this pre-painted set consisting of six parts provides the shoulder harnesses/parachute risers, lap belts, ejection handles, and the green pull handle that actuates the seat’s emergency oxygen supply.  Not only are these beautifully done (right down to ultra-fine stitching details on the belts), the PE details, at least in this builder’s opinion, are the best way to do belts in scale modeling.

Second: # 491014 F-22A.  This set is a rather comprehensive cockpit detail set containing two frets and one set of clear acetate parts.  The first fret features 55 photoetched metal parts, and just about all of them are pre-painted.  You get a complete replacement for the instrument panel (totaling six LCD screens, the integrated control panel beneath the HUD, the left and right side consoles, the rudder pedals, some details for the stick, and a few canopy frame elements).  There are also a ton of data placards for the ejection seat (such as the ACES II markings), the cockpit/canopy frame more broadly, and various other ejection seat parts.  The second, has another unpainted photoetched metal fret containing an additional 44 parts and two clear acetate parts.  The extra PE fret has parts for the cockpit sill surfaces, canopy locking lug attachments, the cockpit map case, the HUD frame, the interior canopy frame, upper ejection seat rail details, and the pyrotechnic control lines attaching to the canopy jettison rocket motor.  This set really is optimized for what you’d need for a canopy-up build.  Also, the clear acetate parts are for the HUD imagery projecting glass and the HUD glass itself.  The cockpit MFD screens are pre-painted with somewhat fictionalized displays as though the aircraft is powered up and in flight.  Just note:  from most angles, the F-22’s HUD projects a strong iridescent green tint or glint.  It’s not clear.

Third, # 49534 F-22A Bomb Bay is a physically large set, with 24 pre-painted parts on one fret along with one primary fret featuring approximately 160 parts.  Of course, the F-22 does not have a bomb bay, but features four “weapons bays,” and this is what this set covers.  This is a really nice upgrade to the kit parts.  For example, it provides the open bay doors as photoetched metal parts.  These also do a far better job of representing scale thickness of the doors than the plastic parts in the kit.  There are also a wide range of features to enhance the detail of the bays themselves, from a few prominent wiring bundles to the launchers and launcher rails, structural elements in the bays, and the circuit breaker boxes on the side bays.  There are also some “bonus” AIM-120 missile detail parts included as well.

Fourth, the various external airframe details are taken care of by #48669 F-22A Exterior.  Here, 72 parts come on one fret, and provide a variety of the diamond-shaped vents and panels on the upper and lower surfaces of the aircraft.  Other parts covered the nose gear well interior, landing gear details such as wiring and plumbing, and gear well door interior detail parts.  However, the largest set of parts on this fret provide significant enhancements for F-22’s thrust vectoring engine nozzles.  It provides a full set of nozzle interior and side baffles.  The afterburner section of the engine (the “afterburner can”) starts off as a flat piece of metal on the fret, but the builder will have to roll it into a cylindrical shape.  Finding the right diameter rod or dowel for that purpose is the only tricky part here.  Overall, these parts do a great deal for the Hasegawa F-22’s engine nozzles, which are really one of the kits few under-detailed areas.

Fifth, quick and easy masking of clear parts and wheel hubs will be accomplished by the use of # EX300 F-22 Masking Set.  This is a pre-cut self-adhesive set.  Just follow the directions.  I used to swear by making my own masks, but over the last few years, I have transitioned to using Eduard masks whenever feasible.  They are excellent, time-saving, and produce a great-looking final product at the end of the day.

In summary, this BIG ED combination provides these sets together at a lower price than if they were bought individually.  It also elevates the level of detail of the Hasegawa F-22A.  If you enjoy working with aftermarket detail sets, you will love this collection of sets for the 1:48 scale Hasegawa Raptor.