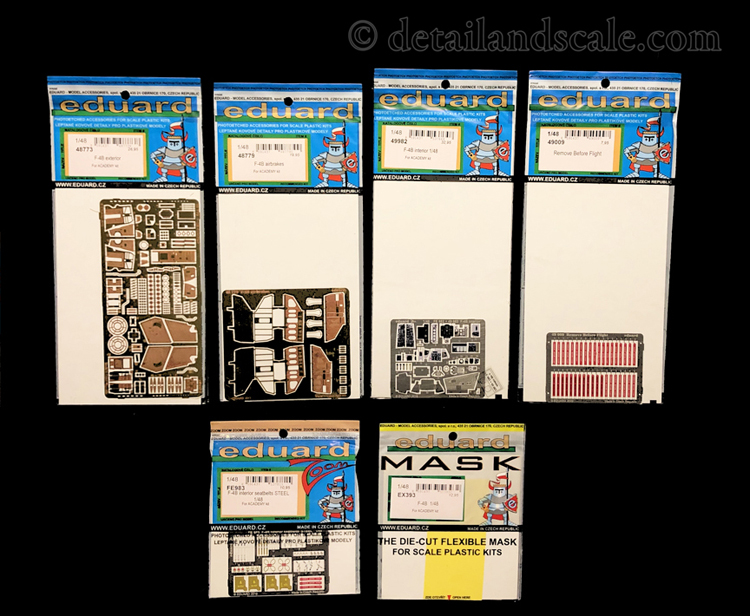 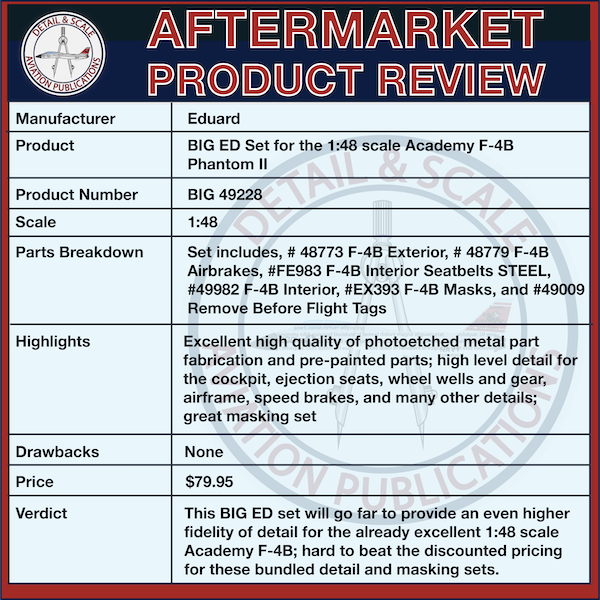 The F-4B was the first operational variant of the classic Phantom II for the U. S. Navy and Marine Corps.  In 1:48 scale, Hasegawa had the only “modern” F-4B kit for a long time, and it was based on early 1980s tooling.  In 2012, Academy came along with their F-4B, which is a generational leap forward in terms of quality, detail, and production.  Eduard then produced a range of detail parts for the Academy F-4B which have appeared and re-appeared over the last several years.  Here, we take a look at a rather extensive collection of six individual sets bundled together (at a savings) in their F-4B BIG ED offering that came out late last year.

Eduard # 48773 F-4B Exterior:  this set comes on a single unpainted fret and contains around 138 parts.  There’s a lot of great detail here for the nose gear well, main gear well structures, the inside surfaces of the nose gear and main gear well doors, and the roofs of the main landing gear wells.  Other parts provide the afterburner flame holders and elements of the first-stage compressor “bullet.”  There are also landing gear details such as tie-down rings, some wiring here and there, and the main gear scissors.  Parts are included for external fuel tank caps, rocket motor exhaust nozzle caps for the AIM-7 and AIM-9 air-to-air missiles, and 12 sets of multi-part bomb fuse assembly details (lots of parts here).

Eduard # 48779 F-4B Airbrakes:  the Phantom had two sets of speed brakes that lowered from the undersurface of each wing.  The kit parts are fine, but this set provides really beautiful PE brakes.  For each speed brake, you fold a three-part integrated metal brake into a single piece.  It’s gorgeous and will look great in the final product.  The speed brake well roof is also provided as a drop-in part.  The hydraulic lines for the brake actuator are included as well.

Eduard #FE983 F-4B Interior Seatbelts STEEL:  the kit ejection seats are really quite good, but there’s always the possibility of adding even more detail.  Here, this ZOOM set provides 41 pre-painted parts for the shoulder harnesses, parachute risers, two styles of seat cushion, face curtain ejection handles, lower ejection handle, and three optional Remove Before Flight tags you can use to display the seat in the SAFE configuration.  The detail here is fantastic, down to the stitching details on the belts and the separate D-rings.

Eduard #49982 F-4B Interior:  this set has pretty much everything you need for the cockpit.  It features two frets.  One is mostly pre-pained with 40 parts.  Here, you get complete replacements for the pilot and RIO’s instrument panels and side consoles.  There are also sidewall details, handles, and other features.  Again, the pre-painting is exquisite, with the smallest of details represented with remarkable clarity.  The dial faces are also treated with Eduard’s “raised glass effect.”

The second fret in this set is unpainted and has 48 parts.  The majority of these parts cover the canopy frames and cockpit sills.  There are also a few additional cockpit parts, rudder pedals, and the rear-view mirrors for both the pilot and RIO.

Eduard #EX393 F-4B Masks:  here, Eduard kindly provides their pre-cut, self-adhesive masking set for the Academy F-4B windscreen and canopies.  These will save a ton of time and will make one’s masking quite precise, indeed.

In summary, this BIG ED combination provides these sets together at a lower price than if they were bought individually.  It also elevates the level of detail several degrees to what is already there.  If you enjoy working with aftermarket detail sets, you will love this collection of sets for the 1:48 scale Academy F-4B Phantom II.