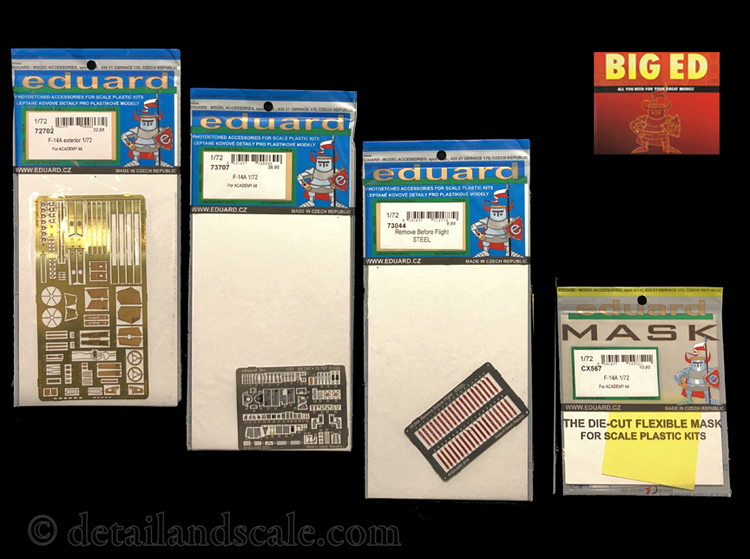 In 2019, Academy released a brand-new 1:72 scale F-14A kit.  The kit’s design takes some inspiration from the superlative 1:48 scale Tamiya Tomcats in terms of its parts breakdown and construction options.  This means that the new Academy F-14 kit is excellent.  Modelers I know who have built Academy’s new F-14A found it to be outstanding.  However, more detail can always be added, especially in 1:72 scale.  Eduard produced a number of aftermarket sets for this kit to enhance its level of detail even further.  They bundled their interior and exterior photoetched metal sets, a masking set, and a remove before flight tag set into a BIG ED release (#BIG 72158; MSRP = $59.95) and sold at a savings for the customer.  Let’s see what’s inside.

The second item is Eduard #73707 – F-14A Interior.  This set contains two phohtoetched metal frets.  One is pre-painted and contains 101 parts, and the other fret holds 16 unpainted parts.  The pre-painted parts are designed to completely replace all the injection-molded details of the Academy cockpit.  You get a complete instrument panel for the pilot and the RIO, side consoles, the pilot’s knee circuit breaker panels, the RIO’s circuit breaker panels in the back seat, and other bulkhead features such as the air conditioning vents.

Additionally, in this set there is a rather important range of enhancements for the kit’s GRU-7A ejection seats.  These include nicely pre-painted and well-shaped face curtain and lower ejection handles, shoulder harnesses and lap belts, parachute pack details, and leg restraints.  Seldom seen in 1:72 scale, the leg restraint details are a really nice touch.

Note, however, that the parts for the RIO’s cockpit in this set represent an early- to mid-life F-14A with the circular TID (Tactical Information Display) radar screen present, only.  There is no PTID (Programmable Tactical Information Display) screen here that made its way into late-life F-14As along with the LANTIRN pod system.  This little side note is relevant, since the Academy kit contains parts for building a late F-14A, F-14B and D where the PTID could come into play.  Here is where it can get a little tricky: early LANTIRN-equipped F-14As and Ds did fly with the TID that was eventually replaced with the much larger rectangular PTID as they became available.  It all depends on the particular aircraft and time period the builder intends to model.  Just be mindful and check your references.

Also included here is CX576 F-14A Academy masks.  These are pre-cut self-adhesive masks for the windscreen, canopy, and wheel hubs.  I use Eduard masking sets all the time, as they are precise, save a lot of work, and produce a very good-looking final product.  This set will go far in the painting of this F-14 kit and make the painting and masking process a real pleasure.

Finally, 73044 Remove Before Flight STEEL features 38 pre-painted remove before flight tags covering three different styles should one wish to add additional realism to your build, pinning and tagging landing gear, ejection seats, weapons, and so forth.

Depending on what you want to do, and the scope of your project involving the new-tool Academy F-14A, the parts in this BIG ED set will provide a range of distinct and very accurate features to your build.  The entirety of this set will be used when I have the chance to build 1:72 scale Academy Tomcat, and hopefully that will be relatively soon!