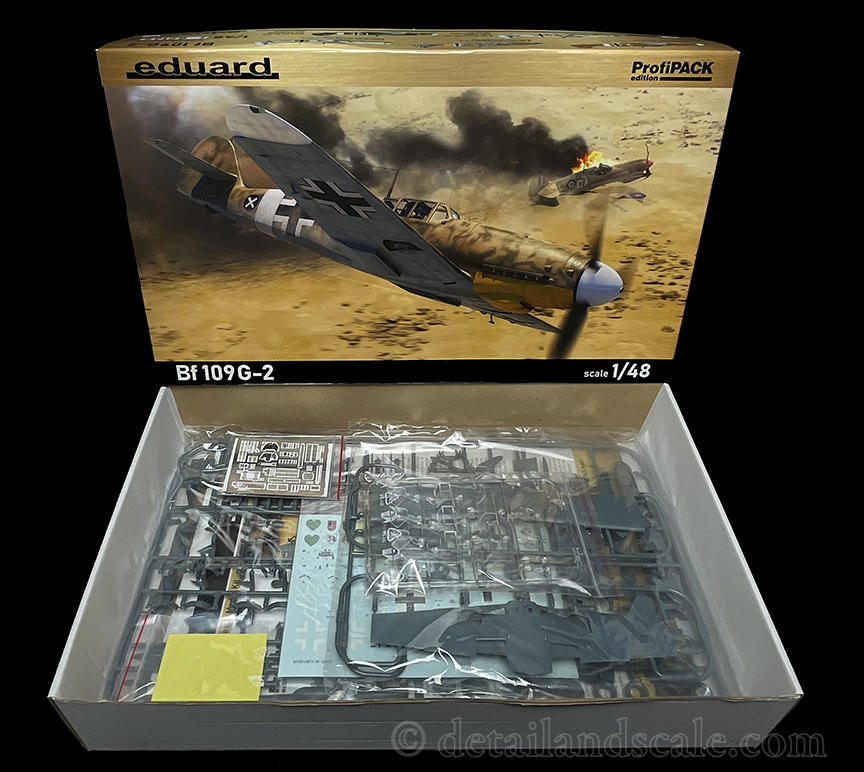 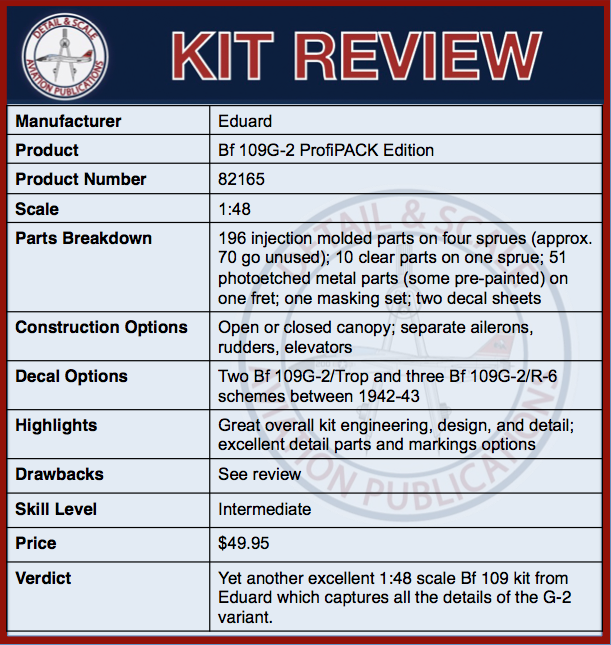 The Messerschmitt Bf 109 was an iconic fighter aircraft of of World War II.  Hundreds of scale model kits have been manufactured of the Bf 109 from cast resin to vacuform media.  Of all of these kits, the 1:48 scale series of Bf 109Gs by Eduard feature excellent quality, and certainly are the most diverse of any manufacturer’s -109 families in 1:48 scale.  In this review, we sit down with the contents of Eduard’s recent Bf 109G-2 ProfiPACK Edition kit.

The Bf 109 was one of the two premier single-seat German fighters of the Second World War.  The prototype flew in 1935 and marked the start of a production run of 33,984 airframes spanning dozens of variants and subtypes.  As a testament to the versatility of the design, Bf 109s were still deadly opponents ten years later as the war came to a close.  While many other combat aircraft developed in the mid-1930s became obsolete as the war progressed, the performance of many late-model Bf 109s allowed them to generally hold their own during the closing days of the war.  Losses by then were unsustainable, however, owing to pilot attrition and loss of experienced German aviators.

The Bf 109G, also known as the Gustav, was an evolutionary development of the Bf 109F-series.  Externally, 109Gs started off being nearly identical to the earlier -F model.  Internally, the wings were reinforced, the windscreen was bulletproofed, and the fuel tanks were surrounded by light armor.  Other new features included outer wheel bay shape changes and the addition of air inlet scoops on both sides of the forward engine cowling that held the latest Daimler-Benz DB 605A engine.  Production of some 1,586 G-2s started in May 1942.  The early G-2 was largely identical to the G-1, but it lacked a pressurized cockpit.  It could reach up to 334 MPH at sea level and 410 mph at 22,000 feet.  Various subvariants of the G-2 emerged, including long-range fighter-bomber, reconnaissance, and “tropicalized” versions.  G-2 production ended in February 1943 as it was superseded by the development of more advanced variants such as the Bf 109G-6.

Eduard’s ProfiPACK Edition of their 1:48 scale Bf 109G-2 consists of 196 injection molded parts on five dark blue-grey sprues (about 70 parts go unused in this version of the kit), and 10 clear parts on one clear sprue.  Some 51 photoetched metal parts (some pre-painted come on a single fret.  There is also a pre-cut self-adhesive masking set used for the windscreen, canopy, and wheel hubs.  The full-color instruction booklet organizes the build over 10 pages.  Decals come on one primary sheet with all the markings, and a set of airframe stencil decals to provide markings options for the following aircraft:

Strengths:  The retooled Eduard Bf 109 family are all superlative kits by any standards.  They hold their own against the exquisite Tamiya Bf 109 kit.  Some history here: Eduard’s initial and highly-hyped release of a new 1:48 scale Bf 109 in 2014 had shape and detail errors, and so they went back to the drawing board.  A corrected version was first released in 2016 and has been the basis for today’s ever-growing family of their 1:48 scale Eduard Bf 109s, including this kit.

All the superlative things I said about their many 1:48 scale Bf 109G kits (see these and related reviews HERE) apply equally to this kit just as well.  Overall, this is a very well designed, precisely fitting kit with an excellent level of detail throughout.  Exterior surface details are sublime, from the recessed panel lines to rivets and fasteners.  Eduard 109s share a range of construction options, including the positionable canopy, separate leading edge slats, flaps, ailerons, elevators, rudder, and radiator flaps.  While the instructions show the separate elevators going straight-in, you can easily modify them if you want them dropped.  There is an even larger mounting pin for the rudder, so to deflect the rudder (if the builder should so choose), just a bit of work hacking off the mounting pin and sanding it smooth will get the job done.

The cockpit, especially with the photoetched metal instrument panel, belts, and clear-cast fuel pipe, is a real highlight. In other words, the plastic parts for the kit cockpit are okay on their own, but the photoetched metal parts in the ProfiPACK set really elevate the detail and accuracy of the cockpit.  For those not into using PE parts, alternate instrument panel dial face decals are provided.

The decals are of the wet-transfer style and are printed by Eduard.  The decals look great, with excellent color, resolution, and thin, restrained carrier film.  The markings options are quite diverse and range from options involving G-2s operating from Egypt to the Eastern Front.  The depth of research and the histories that Eduard put into these markings is very impressive, and markings option one tells a unique story.  The winter camouflaged Bf 109G-2/Trop is quite distinctive.  The second, smaller decal sheet contains complete maintenance stencils for the airplane.

Weaknesses:  No substantive critiques of this kit set are immediately apparent.

Eduard’s Bf 109G-2 ProfiPACK Edition is another top-notch addition to Eduard’s 1:48 scale family of Bf 109s.  For those interested an adding even more detail, Eduard offers a range of additional detail sets as well.  It will be of interest to scale modelers interested in the Bf 109, Luftwaffe, World War II, and aircraft subject matter in general – in other words, wide ranging appeal!