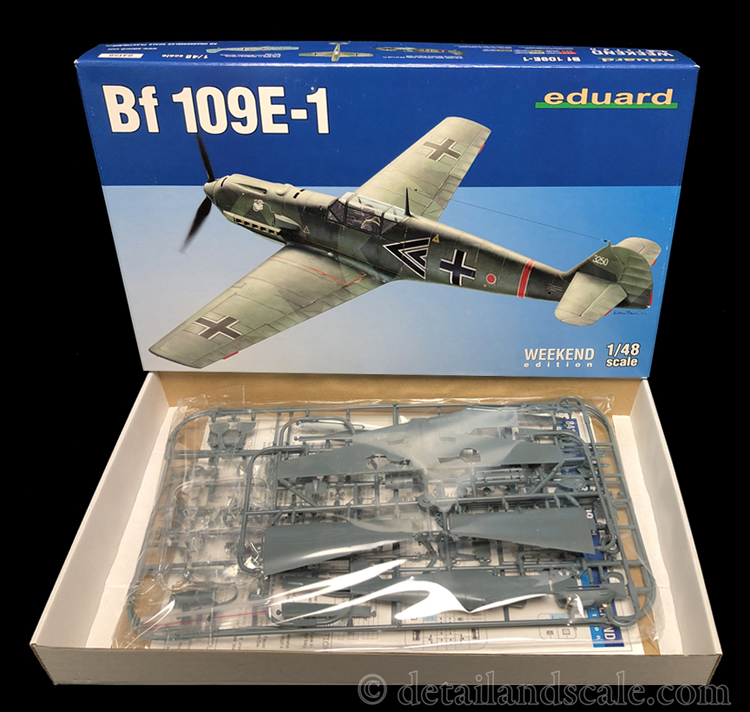 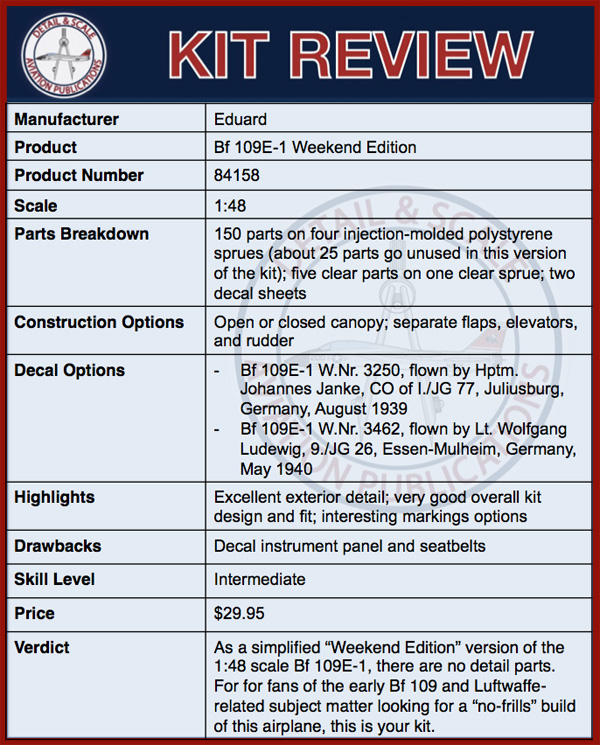 The Messerschmitt Bf 109 is one of the most storied warplanes of the 20th century and one of the most popular subjects for scale model kits.  It has been the subject of several hundred injection-molded kits along with more esoteric limited-run resin and vacuform offerings in just about every imaginable scale.  In this review, we sit down with Eduard’s recent release of a their very straightforward Weekend Edition of their 1:48 scale Bf 109E-1 kit.

The Bf 109 was one of the two premier single-seat German fighters of the Second World War.  The prototype 109 flew in 1935, beating out the predecessor of the Fw 190.  The entire 109 production run churned out 33,984 airframes spanning dozens of variants and even more subtypes.  In the mid-1930s, it was the most advanced fighter of its era, featuring an all-metal monocoque construction, a closed canopy, and retractable landing gear.  As a testament to the strength of the basic design, Bf 109s were still deadly opponents ten years later when the war came to a close as jet fighters came onto the scene.  Indeed, Bf 109s flew on for years to come with the IAF, the Swiss and Czech air forces, and with Spain, who flew them the longest – until 1967.

The Bf 109E was a developmental progression on the features fielded in the C- and D- models.  The E-, nicknamed the “Emil,” represented the first major redesign of the original 109.  Many of the changes related to the new powerplant.  The larger, longer, and more powerful Daimler-Benz DB 601A increased the aircraft’s top speed by 60 miles per hour and its service ceiling by nearly 5,000 feet.  The DB 601 engine used direct fuel injection that provided excellent performance in negative-G flight.  This engine required bigger radiators, and the best (least drag-inducing) place to put them was under the wings.  This required significant interior redesigning, from structural wing elements to the inclusion of radiator ducting under the skin.

The Bf 109E-1 was fitted with 7.92 mm MG 17 machine guns above and behind the engine and two more MG 17s in the wings. Later, many were modified to more heavily armed E-3 configuration. A few E-1s were modified as Bf 109E-1Bs and represented the first Bf 109 fighter-bomber, fitted with either an ETC 500 bomb rack capable of carrying one 550 lb. bomb, or four 110 lb. bombs. The E-1 was also fitted with the Reflexvisier gunsight and the FuG 7 radio. The E-1 was introduced into service in 1938 and total of 1,183 were built. Many saw action in the Spanish civil war, over Poland at the outbreak of WWI, , during the Blitzkrieg across the Low Countries and France, Dunkirk, and the Battle of Britain.  By 1941, the new Bf 109F made the Emil obsolete and it was withdrawn from front line units.

Eduard’s Bf 109E-3 Weekend Edition in 1:48 scale is a 2020 reissue of their original 2012 new-tool release.  This Weekend Edition features 150 parts on four blue-gray sprues, and five clear parts on one clear sprue.  About 25 parts in the kit are not used in the construction of the E-1.  The instructions guide the build over nine pages.  The markings come on two Eduard-printed decal sheets for the following airplanes:

Strengths:  As is the case with all of Eduard’s 1:48 scale Bf 109s, including the retooled Eduard Bf 109Gs that came on the scene in 2016, this kit is excellent by any standard.  The kit has a range of construction options, including the positionable canopy, leading edge slats, flaps, ailerons, elevator, rudder, and radiator flaps.  It contains a decent injection-molded DB 601 powerplant and nose guns.  Surface details including the recessed panel lines, rivets, and fasteners are all simply sublime.  For all those who have gazed upon this kit, the surface details are rather hypnotizing (see the photos below).  I also test fit the fuselage and wings, and the fit appeared flawless.  Flaps, leading edges, ailerons, and rudder are separate parts and can be positioned as desired.

The decals are printed by Eduard and look technically excellent, with great color, resolution, and thin restrained carrier film.  The second, smaller sheet contains a complete set of maintenance stencils for a single 109.  The markings options are both great choices, but the early war colors and camouflage of the second option is intriguing and a little bit unusual.

Instrument panel details can be painted or represented by decals, and in the Weekend Edition of the kit, the seat’s shoulder harnesses and lap belts are only provided as decals.  Ailerons, elevators, rudders, and radiator flaps are all separate parts and are positionable.  Engine exhaust stacks are very slightly concave (but not quite hollowed out) at their ends.

Weaknesses: Eduard’s 1:48 scale Bf 109E-1 is hard to fault. Still, the injection-molded instrument panel is a little basic for some, and you really do need to use the kit-supplied instrument panel decal to represent any instrument face details  While seatbelts and harnesses are provided, they are also in decal form (not your reviewer’s favorite choice for belts). Also note that the upper engine cover and nose gun compartment cover are not really positionable.  They are either on or they are off.  The hinging mechanisms are not represented.

The Eduard 1:48 scale Bf 109E-3 Weekend Edition is a streamlined, no-frills boxing of this kit.  If that’s what you’re looking for, you can’t go wrong.  Still, if you find yourself looking for more detail, Eduard produces an entire range of photoetched metal and Brassin sets for their 1:48 Emil, from seatbelts to landing flaps and just about everything else in between.