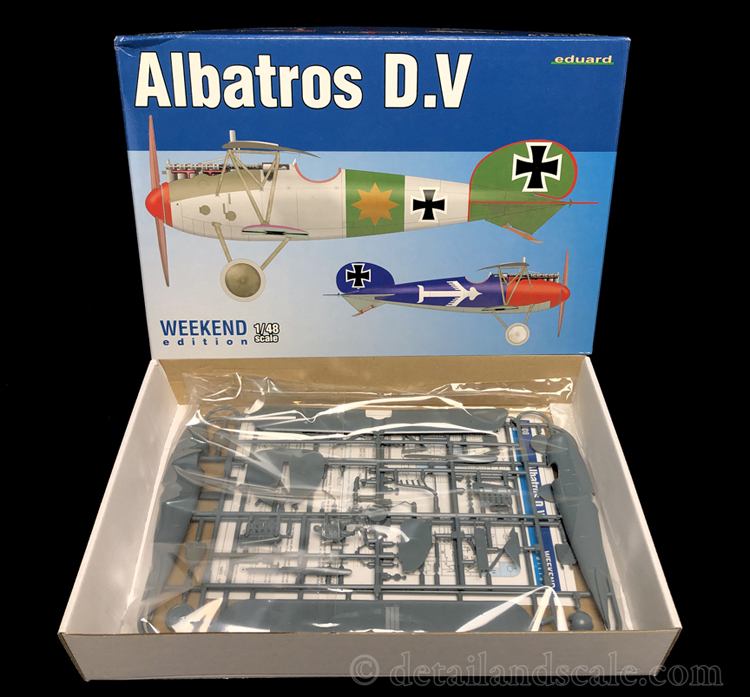 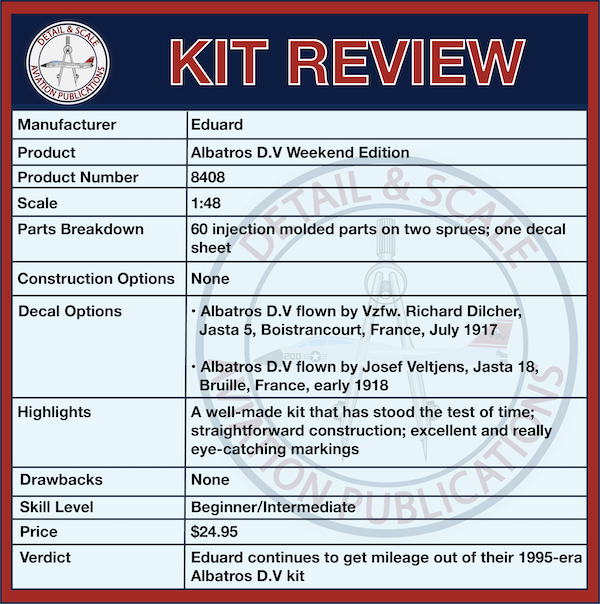 Within the span of a mere 15 years, aircraft design and engineering evolved considerably from the Wright Flyer to deadly combat aircraft.  Yet, the optimal balance between structures, powerplants, weight, and aerodynamics was still an experimental affair.  The German family of Albatros D-fighters was good example of this.  It was the most numerous of any German fighter lineage in the Great War (4800+ built).  They were ace-makers – and they looked dangerous with its sleek, bullet-shaped fuselage and low tail.  Yet, they were dangerous in other ways, suffering from a common Achilles Heel:  catastrophic wing failures.  In this recent release, Eduard has re-popped their 1:48 scale injection-molded Albatros D.V from their original 1995 new tool kit as a Weekend Edition kit.  Let’s check it out.

By early 1917, it was clear to the German military and engineers at Albatros Werke that their D.III was not only becoming obsolete in light of the newest Allied fighters, but under high-g loading and prolonged dives, the lower wing would twist and fail.  In response, the D.V was proposed and flew in April 1917.  It used the same Mercedes D.IIIa 170 hp powerplant pushing its top airspeed to about 116 mph, but its fuselage was fully elliptical in cross-section, featured a larger rudder, and a slightly revised and strengthened sesquiplane configuration.  It was armed with a pair of 7.92mm machine guns synchronized to fire through the prop.

The D.V entered service in May 1917 and structural failures of the lower wing occurred with increasing frequency.  Upper wing cracks also plagued the airplane.  Many pilots, including Manfred von Richthofen, preferred the D.III as the D.V was physically taxing to fly in addition to its maneuvering limitations.

The D.Va was developed in response and incorporated stronger wing spars, heavier wing ribs, a reinforced fuselage, and more powerful and heavier engine to offset as much of the newly added weight penalties.  Still, wing failures continued.  At the same time, structural issues plagued the Fokker Dr.I and the less-than-stellar performance of the Pfalz D.III left the Germans with no alternative to the D.Va for another year until the Fokker D.VII came on the scene.  Production of the D.Va closed in April 1918 following a production run of 700 D.Vs and 1,612 D.Va airframes.

Strengths:  This kit might be based on an “old” mold by Eduard, but its still quite impressive.  They did good work back then, too!  The kit itself is simple and I find it to be accurate.  There are not a lot of parts, fit is quite good, and surface detail is excellent.  This includes really nice recessed panel lines on the fuselage.  There’s a pilot figure, too, but the instructions suggest not using him.

Even though it’s a Weekend Edition kit with only two schemes, you’ve got some awesome markings options.  They are both outstanding choices for the scale modeler.  You will have a hard choice figuring out which scheme to do, but Veltjens’s Jasta 18 D.V draws my attention most.  The decals appear to have been printed in-house by Eduard, and they all look great.  I can see no technical errors in printing.

Weaknesses:  I cannot offer any substantive critiques of this kit.  One minor issue was that in our sample, there’s a pretty deep sink mark in the upper torso of the pilot figure that will need to be filled – but only if you go against the instructions and wish to use the figure!

Eduard continues to get mileage out of their solid 1995-era Albatros D.V kit.  Fans of WWI subject matter will certainly enjoy this issue of the kit, and its relative simplicity, nice detail, and markings options extend a broad invitation to a wide range of scale modelers.