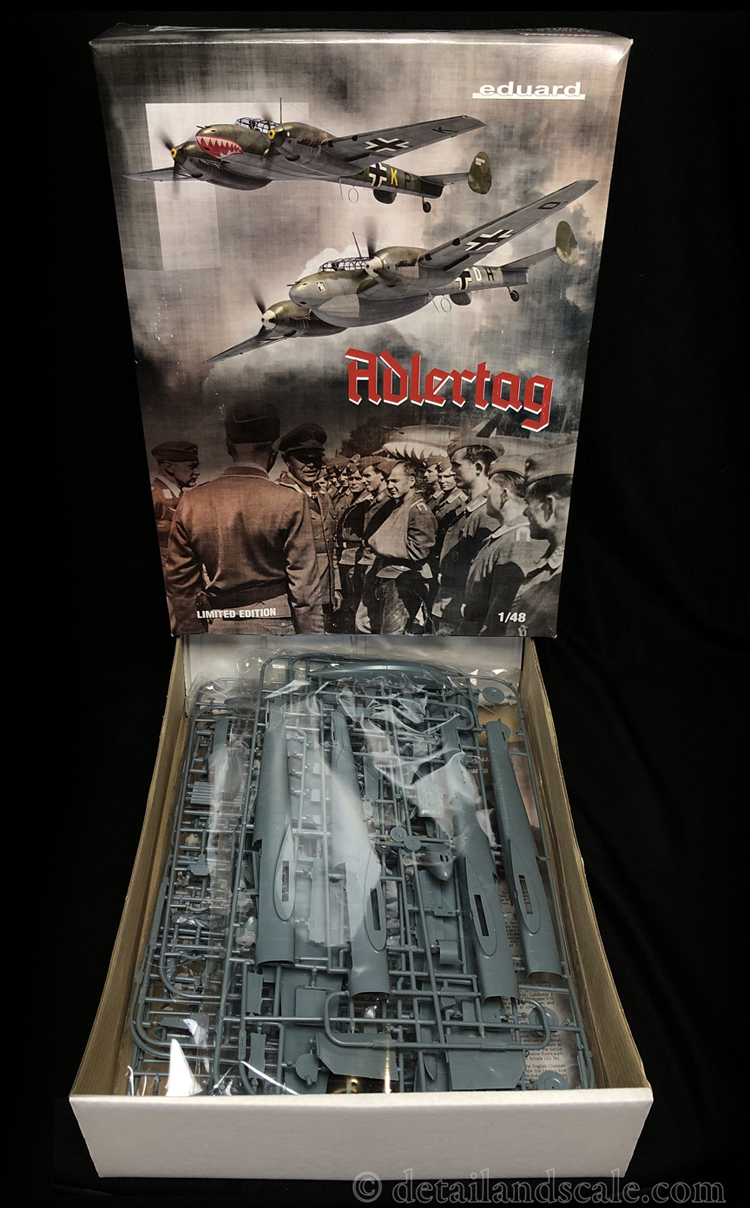 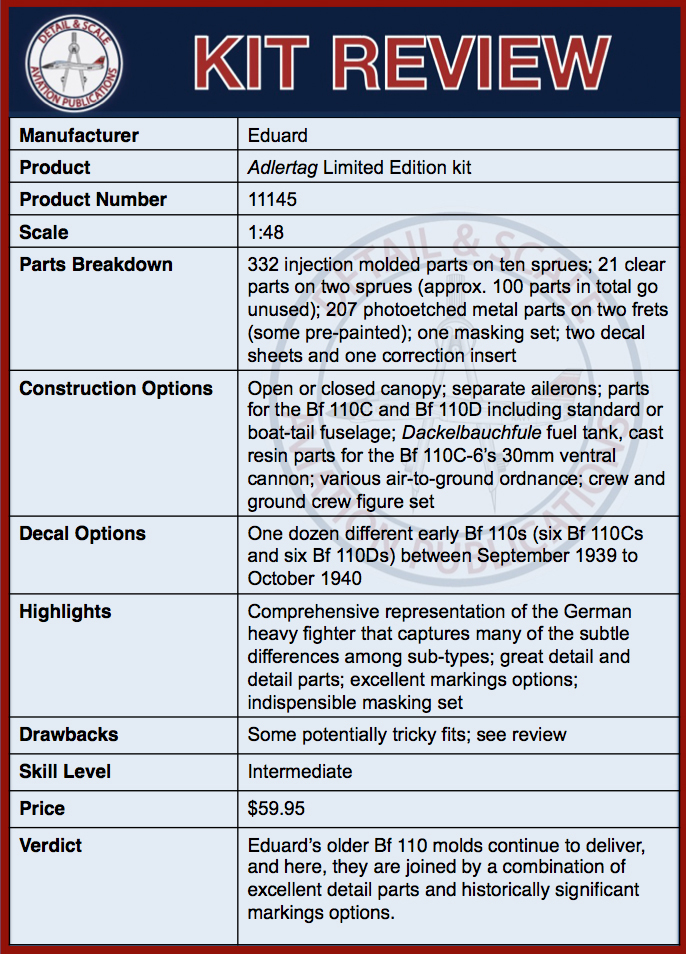 The Battle of Britain represented a turning point in World War II and in world history in general.  Previously seen as practically invincible, the Luftwaffe’s onslaught upon Europe was finally stopped by the RAF.  The Messerschmitt Bf 110 was one of the key German aircraft involved in that engagement, now almost 81 years ago.  In this limited edition set, Eduard has reissued their venerable 1:48 scale Bf 110 kit in a limited-edition boxing with cast resin and photoetched metal detail parts, a masking set, and decals for 12 different Bf 110s involved in Operation Adlertag, or “Eagle Day,” that launched the air assault against Great Britain in early August 1940.  A sample recently landed on our review bench, so let’s sit down with this kit and see what we have.

Adlertag, or “Eagle Day” was the first day of Unternehmen Adlerangriff, or “Operation Eagle Attack” that was the codename for the Luftwaffe operation to destroy the British Royal Air Force (RAF) preceding the Nazi invasion of Great Britain.  The degradation and destruction of the RAF Fighter Command would confer air superiority to the Germans, and Göring had promised Hitler that Adlerangriff would be successful within days, or, at the outside, weeks.  The start of the Adlertag was postponed several times due to poor weather.  Initial engagements with the RAF began on August 8th, 1940, but Adlertag was launched on August 13, 1940.  Waves of Ju 87, Ju 88, and Do 17 bombers attacked English airfields and were escorted by Bf 109 fighters and Bf 110 heavy fighters.  The Luftwaffe was ultimately repulsed by the RAF, owing to various factors such as the RAF’s early adoption of radar.  Also, throughout Adlerangriff, a combination of arrogance and hubris led to the Luftwaffe’s failure in executing a unified or focused strategy to defeat the RAF Fighter Command.  At first, they aimed to destroy RAF bases, and when that was unsuccessful, they toggled to strategic day bombing, attacking British industry and ports.  Ultimately, the Blitz was initiated which aimed to terrorize civilians, but failed to break the morale of the British people.

During this period, the Bf 110 was a key asset for the Luftwaffe.  This heavy fighter was used to escort the German bombers and secondarily conduct air-to-ground attacks.  The Bf 110 held some performance advantages that could be leveraged over the RAF’s Spitfires and Hurricanes.  While Bf 110s had mowed down earlier Polish and French opposition, the RAF shot down more than 220 Bf 110s by October 1940.  The Bf 110 force claimed approximately 400 kills over English airspace to achieve an estimated kill ratio of 2:1, and some two dozen crews attained ace status.  Still, it was not nearly enough to break the back of the RAF and Germany lost the Battle of Britain.  The Bf 110 was withdrawn from daytime operations as it evolved into a night fighter and a long-range heavy fighter along the Eastern Front and in the Mediterranean theater.

Strengths:  This kit is based on an older set of tooling by Eduard first released in 2007.  The basic kit has appeared in 24 different issues to date.  By today’s standards, it remains well regarded and liked by scale modelers.  The fit of the wing roots, nacelles, and nose are known as potentially tricky.  However, the advice I have heard from those who have built the kit is to take your time with these areas and do not rush, as practically perfect fits are attainable.  Exterior panel lines and fasteners/rivets are delicately recessed while other details are raised where they should be.  Wheel well, landing gear, and wheel details are all quite good.  After all, Eduard did solid work back in 2007, too.

The kit features a conventional approach to parts breakdown, with left and right fuselage halves, upper and lower wing halves, and so forth.  The engine nacelles are separate assemblies that slip onto the wings.  The cockpit is nicely detailed just on its own (and see below).  The ailerons are separate parts, and the canopy can be positioned open or closed.  The complete nose machine gun compartment features four MG 17 machine guns, ammo feeds, and pneumatic bottles, and the compartment can be displayed open or closed.

In this limited-edition set, the construction options are yet more extensive, still.  First, there are two sets of fuselage halves.  One represents the standard Bf 110 fuselage, and the other possessing the “boat tail” fuselage configuration.  Each fuselage style is applicable to six of the twelve markings options in the box.  There are parts that cover many minor cockpit and external airframe differences, from instrument panel variations to rear-facing machine gun configurations and two different styles of tail wheels.  There are also three different options for the lower fuselage configuration.  The Brassin cast resin parts (along with a few PE parts) are used in Markings Option L that build up into a impressive scale representation of the deadly 30 mm cannon carried by the BF 110C-6.  Plastic parts are used to represent the alternate 1,000-liter Dackelbauch (or Dachshund Belly) ventral slipper fuel tank used in building the aircraft represented by Markings Option D.  The ETC-250 bomb rack, which here allows the mounting of a pair of 250 kilogram bombs come into play with Markings Option K.   Incidentally, those two bomb bodies involve the only parts used from Sprue D, so the kit can be seen as containing a “bonus” sprue of air-to-ground weapons.

In the Bf 110, the cockpit is a highly visible focal point, partly owing to the -110’s extensive greenhouse-style canopy.  In this limited edition kit, the cockpit is going to stand out, thanks to a combination of very nicely done plastic parts and photoetched metal detail parts.  The pilot’s instrument panel, right side console, and throttle quadrant all receive top-flight pre-painted PE detail upgrades, along with the radio stacks in the rear cockpit.  If PE parts are not your preference, the kit also supplies decals for the instrument panel and radio face details.  The pilot and navigator/radio operator/rear gunner’s seats are also provisioned with great pre-painted harnesses and belts.  Other PE parts are provided for various airframe details, such as the wing mounted radiator grills and lower tail antennas.

This kit also includes a few crew figures with the inclusion of Eduard’s Luftwaffe Personnel Set.  In particular, there’s a standing pilot wearing a flight jacket, a Luftwaffe officer, and four ground crew: one carrying an MG 17 machine gun, one standing with a photoetched ammo belt around his shoulders, and two crewmen together pulling out another PE ammo belt from an ammunition canister.  Also included are injection-molded parts for a basic maintenance table and set of six photoetched tools (two wrenches, two pliers, a screwdriver, and a set of calipers) to dress up the tabletop.  Overall, the crew figures look quite nice (but see below).  Their facial details are very good for 1:48 scale.

The masking set is indispensable.  I normally use Eduard pre-cut self-adhesive masking sets whenever I can, since they save a lot of time and do such a precise and clean job of masking clear parts.  Their value is double (or maybe even triple) in this setting with the extensive framework of the Bf 110’s windscreen and canopy.   The decals are of Eduard’s new wet transfer type, and they look excellent in terms of design, detail, color, and register.  The markings options range the gamut of Battle of Britain paint schemes, from the shark-mouth Bf 110C in Markings Option I to half a dozen different camouflage schemes and various examples of nose art.

Weaknesses:  Aside from the potential of finicky fit with the engine nacelles, wing roots, and nose gun cowl, I did note that several of the crew figures are affected by notable sink marks… in the middle of their bodies.  Some filler should take care of that quickly, though.

Eduard’s Limited Edition Adlertag kit of the 1:48 scale Bf 110C/D is quite interesting, unique, and carries on their Battle of Britain themed kit releases quite well.  Not only is Eduard still getting solid milage out of their older but still high-quality Bf 110 molds, but the combination of excellent detail parts, diverse markings options, and historical significance is hard to beat.  Fans of Luftwaffe and WWII subject matter will certainly enjoy this issue of the kit, and its broader allure extends a wider invitation to an even broader range of scale modelers.