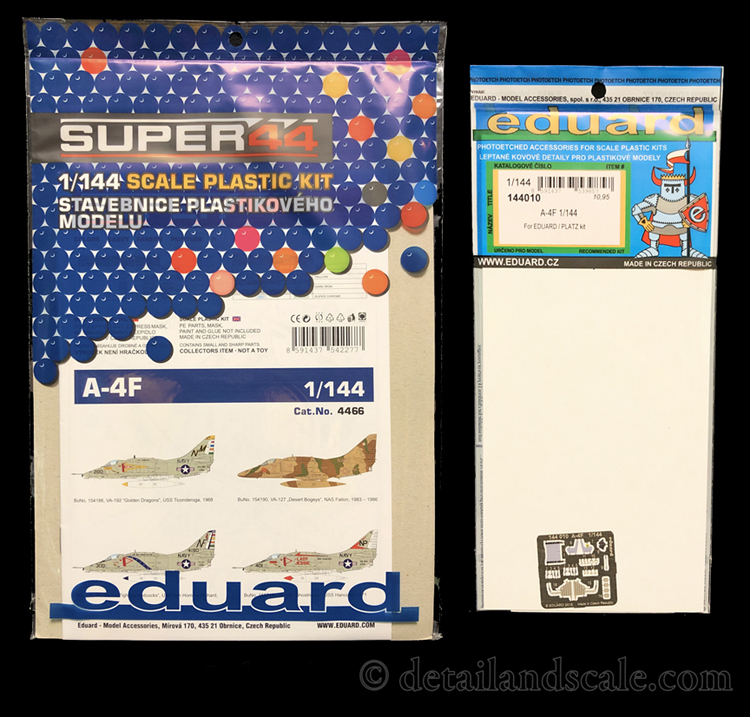 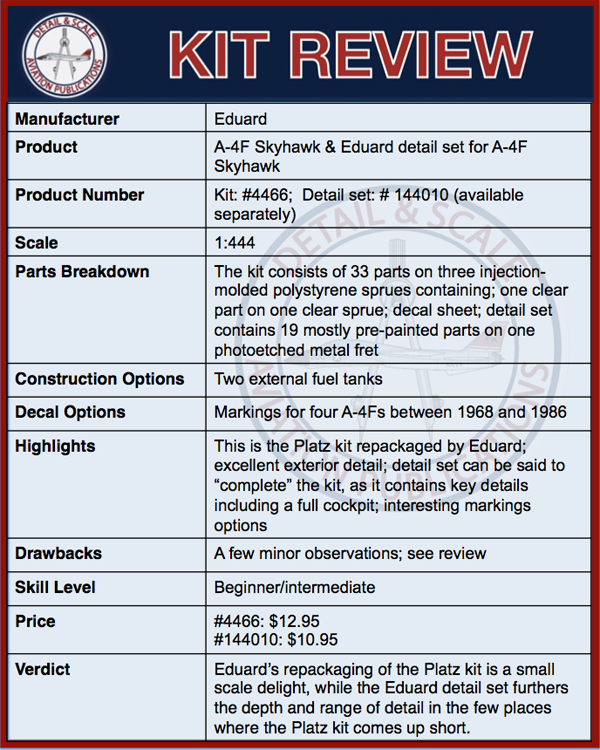 Eduard’s SUPER44 product line keeps on growing with very nice 1:144 scale kits.  In this review, we take a look at their small-scale A-4F Skyhawk kit.  However, it would be remiss not to also consider in the same breath Eduard’s photoetched metal detail set for this kit, as it makes a big difference to enhance key areas of the kit.  Let’s see what Eduard has dialed up for this small-scale Scooter.

The legendary A-4 Skyhawk was a carrier-based attack aircraft designed by Ed Heinemann and built by McDonnell Douglas beginning in the 1950s.  Skyhawks (affectionately nicknamed “Heinemann’s Hotrod” or “the Scooter”) played key roles in the Vietnam war, and foreign A-4s contributed significantly to the Yom Kippur and the Falklands wars.  The jet was also a favorite as a U. S. Navy adversary and for the Blue Angels.

Upon entering service with the U. S. Navy and Marine Corps in 1956, the A-4 proved to be relatively simple yet versatile.  It was capable of delivering conventional or nuclear weapons from aircraft carriers during day or night and under all weather conditions.  While its engine did not feature an afterburner, it still possessed a very good thrust-to-weight ratio and could carry up to 9,900 pounds of ordnance (equivalent to a B-17 Flying Fortress).  The wing roots each contained one Mk.12 20mm cannon for ground attack.  Navy and Marine Corps A-4s were both among first jets to fly combat missions during the Vietnam war and also conducted some of the final missions of the conflict.  A-4s flew tens of thousands of combat sorties during the war, dropping millions of pounds of bombs.  A total of 195 A-4s were lost in combat to all causes, with 32 shot down by SAMs while one was splashed by a MiG-17.

The A-4F was an upgraded A-4E with the addition of an avionics hump on the fuselage spine, spoilers of the top of the wing to shorten the landing roll, nosewheel steering, and more powerful J52-P-8A engine with 9,300 lbs. of thrust.  Later, the A-4F was upgraded with the J52-P-408 that provided 11,200 lbs. of thrust.  A-4Fs served from front-line squadrons to the Blue Angels.  A total of 176 were built.

Eduard’s 1:144 scale A-4F consists of 33 parts on three sprues.  One clear part (combined windscreen and canopy) are provided on one clear sprue.  A pre-cut self-adhesive masking set is also provided.  The instructions guide the build over some 30 steps.  The markings come on a single decal sheet for the following airplanes:

Strengths:  There was a time when most 1:144 scale kits were cringe-worthy, inaccurate, and toy-like.  As injection molding has advanced, so has the quality of these most minuscule kits.  Here, the plastic itself comes from Japanese kit manufacturer Platz, and it is excellent.  Platz does great work and they specialize in 1:144 scale.  The surface details are rich and complex even for 1:144 scale, and all the panel lines are very delicately recessed.  It’s gorgeous.  Even the ultra-fine landing gear, wheel hub, and wing root cannons are represented here.  The wing vortex generators are too fine in this scale to mold in scale thickness, but they are represented by decals, at least.  There is a rudimentary cockpit (basically, just an ejection seat).  Shoulder harnesses and lap belts are provided as decals.  The single-piece windscreen and canopy also look quite nice, and Eduard’s masking set for the wheel hubs and clear parts is a very solid touch.  Two underwing drop tanks and a centerline pylon are provided as external stores.

The markings options are all quite interesting and include the famous “Lady Jessie” and other iconic schemes, including a very attractive Navy adversary scheme.  Decals were printed by Eduard and they look great, down to some of the finer airframe stenciling details.

Weaknesses:  There’s only a few small observations to consider.  The engine exhaust pipe is several scale feet too shallow.  The ESCAPAC ejection seat is a bit misshapen, but in 1:144 scale, it’s still nice to see that it is still recognizable as an A-4 ejection seat.  The very thin refueling probe is a bit bent as it sits on the sprue, but one should be able to straighten it out as construction progresses.

Before wrapping this review up, let’s also take a look at Eduard’s photoetched metal detail set for the A-4F, available separately.  It contains 19 parts (most of which are pre-painted) on one small fret which represents a major upgrade to this kit and are very much worth considering.  These include new ejection seat sides (to correct the principle shape error mentioned above), photoetched metal ejection seat shoulder harnesses and lap belts, and the overhead ejection handle.  This set also features a complete photoeteched metal cockpit tub and instrument panel, replete with very fine pre-painted details.  A few other airframe elements are also provided, such as details for the main gear wells and chaff and flare dispensers.  This set makes a considerable difference, adding some key details that will elevate the quality, accuracy, and appeal of the completed model.

Eduard’s re-packaging of the Platz 1:144 scale A-4F Skyhawk is a small-scale delight.  Addition of the Eduard detail set furthers the depth and range of detail to the point where it completes the model.  As someone who enjoys working in 1:32 scale, I look forward to at some point soon building this kit with the Eduard detail set.  For some, this can be really enjoyable adventure in “something different” while fans of 1:144 scale will really enjoy this Eduard treatment of the Platz kit.