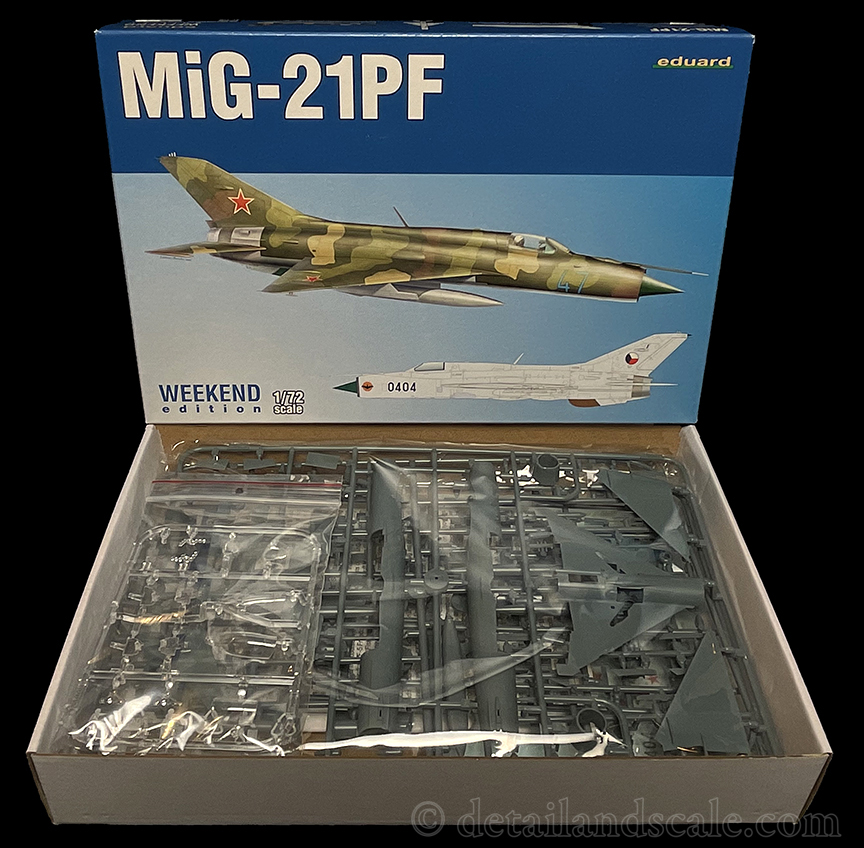 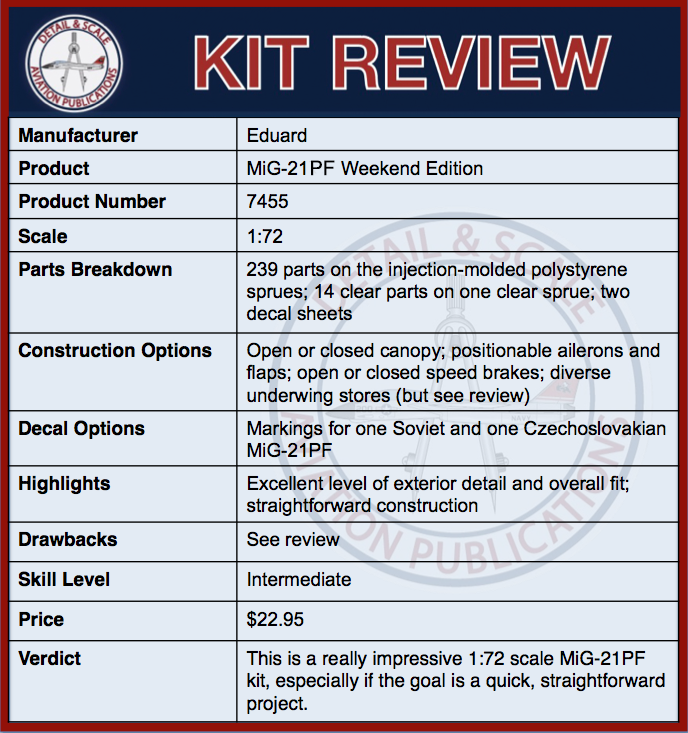 Eduard manufactures the best MiG-21 kits in 1:144, 1:72, and 1:48 scales.  Their new family of 1:72 scale Fishbeds have been growing over the last few years across ProfiPACK, Weekend Edition, and Limited Edition boxings.  In this review, we take a look at their “no-frills” Weekend Edition issue of the MiG-21PF in 1:72 scale which is aimed at scale modelers looking for an inexpensive and straightforward Fishbed build.

The Mikoyan-Gurevich MiG-21 originated as a second-generation Soviet jet – a lightweight, Mach 2-class aircraft that aimed to blend the strengths of a fighter with an interceptor.  The MiG-21 was distinctive for its prominent air inlet shock cone.  More than 10,600 Fishbeds were mass-produced by the Soviets with several hundred others manufactured under license in India and Czechoslovakia.  Fishbeds were also produced for export with many additional versions going to more than 60 nations.  MiG-21s saw extensive combat among these air arms, from the air war over Vietnam to nearly every Arab-Israeli war, hostilities between India and Pakistan, the Angolan Civil War, the Iran-Iraq War, the Syrian Civil War, and many other smaller conflicts.

The MiG-21PF first appeared in 1962 with the in-house designation of Izdeliye 76 and was assigned the NATO reporting name Fishbed-D.  They were manufactured in both the Gorky and Moscow plants until 1968.  This variant was optimized for the all-weather interceptor role and sought to improve upon some of the weaknesses of earlier models, though it still suffered from short range.  The “P” stood for Perekhvatchik (“Interceptor”) and the “F” for Forsirovannyy (“Uprated”).  The MiG-21PF was powered by the R11F2-300 turbojet engine.  The first six production blocks fielded the older TsD-30T radar which was replaced by the more modern RP-21 radar and fire control system beginning with the seventh production batch.  With its cannon removed, the MiG-21PF’s only weapons were the RS-2US and RS-3 air-to-air missiles.  MiG-21PFs were exported to various Warsaw Pact countries as the Izdeliye 76A.  The only difference between those jets and front-line Soviet aircraft was a different set of IFF gear.

Eduard’s 1:72 scale MiG-21PF Weekend Edition kit comes on four blue-gray injection molded polystyrene sprues containing 239 parts.  About 70 of these parts go to external stores, and nearly all of those are not used on the PF variant.  Fourteen clear parts are present on one clear sprue.  The instruction booklet organizes the build over 13 pages.  The decals come on two sheets and provide markings and airframe stencils for two Fishbed-Ds:

Strengths:  As noted earlier and is widely appreciated, Eduard’s 1:72 scale MiG-21s are the best around.  Here, one will encounter a very straightforward and uncomplicated parts breakdown from the cockpit, wheel well assemblies, fuselage halves, and wing halves.  To eliminate seams and seam clean-up, the leading edge of the upper wing half carries over to the bottom of the wing as an extended lip.  It also seems that as many parts as possible were molded as single-piece assemblies, such as the combined spine and vertical stabilizer assembly, horizontal stabilizers, engine shroud, pylons, and air-to-air missiles.  A few other parts are more complex, such as the multi-piece KM-1 ejection seat and the separate wheel hubs, but this allows for the construction of the most detailed injection-molded ejection seat you could wish for, especially in 1:72 scale.  I also dry fit the fuselage halves and the wings – they are airtight.  If you need to use filler, you might be doing something wrong.

Overall surface detail of the exterior of the airplane is outstanding for any kit and especially in 1:72 scale.  The panel lines are delicately and precisely recessed, and some of the finest recessed rivet detail you’ll ever see are on these wings and fuselage.  I would plan on painting this kit with a very thin paint such as Mr. Paint so as not to accidently fill in some of that gorgeous rivet detail.  Molding detail is excellent, from the quilted ejection seat backpad to bulkhead details, afterburner turbine face, wiring on bulkheads and gear well parts, landing gear, and missile details.  You also get separate and positionable ailerons, flaps, horizontal stabilizers, a positionable canopy, options to extend or retract the speed brakes, and other notable details such as gear door actuators which are often overlooked in 1:72 scale.

As a Weekend Edition kit, there are no additional cockpit detail parts.  Instrument dial faces and other cockpit details, along with the ejection seat harnesses and belts, are provided as decals.  Also note that while diverse external stores are included in this kit (one 800-liter external centerline fuel tank, two 490-liter drop tanks, two RATO bottles, two RS-2US missiles, two R-3S missiles, and two R-13 missiles, and UB-16 unguided rocket pods), the RS-2 and RS-3 missiles were the only ordnance flown on the MiG-21PF.

Only two markings options are provided in this Weekend Edition issue: a camouflaged Soviet jet and a natural metal scheme flown by Czechoslovakia.  The decals are of the “wet transfer” style.  The secondary (but larger) decal sheet features the hundreds of airframe, pylon, and external stores stencils.  As far as the decal printing is concerned, no flaws were observed.

Weaknesses:  I can identify no obvious errors or issues in shape, size, configuration, or engineering.  Of course, the gear wells are nice but simplified as they must be for this small scale.  A scale modeler can always add more detail (wiring/plumbing), and the kit provides a great basis to do so.  I would argue the ejection seat leg guards are thick and over-scale.

This is a really impressive 1:72 scale MiG-21PF kit, especially if the goal is a quick, straightforward project.  However, keep in mind that there are various Eduard detail sets for their MiG-21s.  If you want more detail opportunities, they are out there.  In the meantime, enjoy this kit.