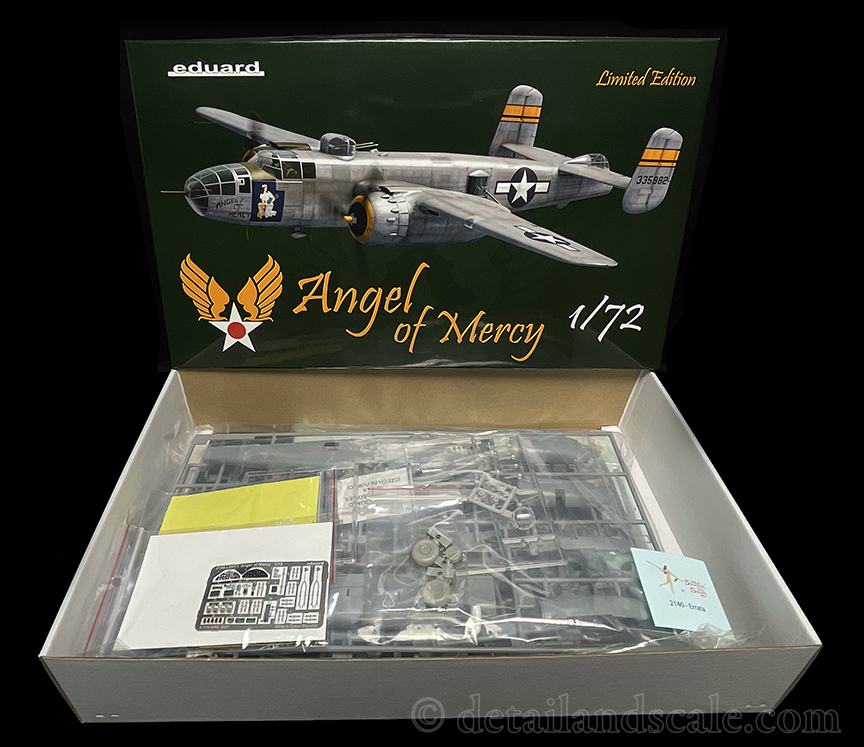 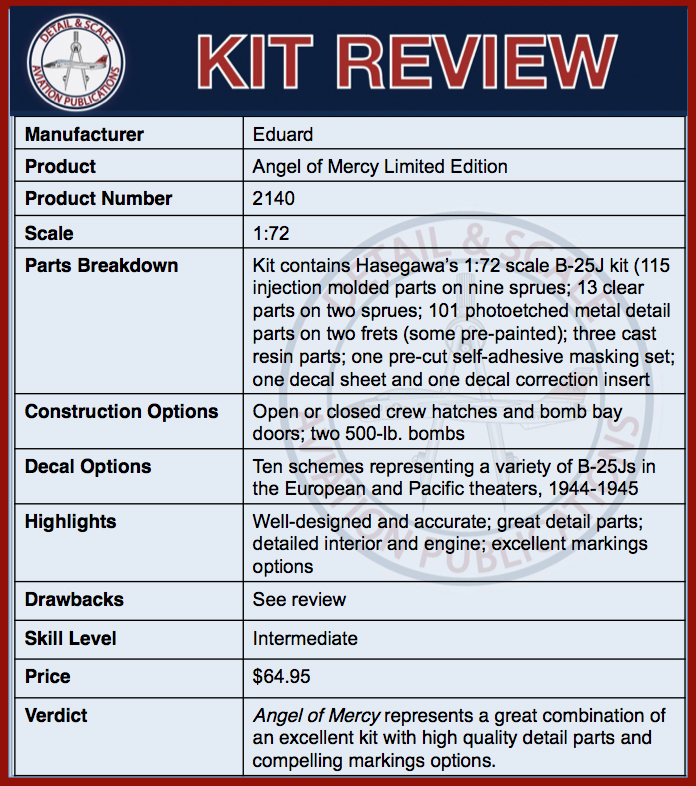 The North American B-25 Mitchell was one of the most versatile combat aircraft of the Second World War.  B-25s flew in all theaters of operation, serving in the roles of a medium bomber, gunship, coastal patrol aircraft, and more.  Recently, Eduard released a 1:72 scale limited edition kit called Angel of Mercy.  This kit set contains the Hasegawa B-25J and includes Eduard photoetched metal detail parts, cast resin detail parts, and decals for ten different B-25Js from the 1944-1945 timeframe.

The origins of the B-25 date back to a 1939 Air Corps specification for a medium bomber that could carry a 2,400-pound bomb load over 1,200 miles at 300 mph.  North American’s NA-62 design won the contract, and with war looming, it was placed into immediate production.  The first B-25 first flew in August 1940 and without any true prototype airframes, the first Mitchells were all works in progress.  These aircraft conducted the development work and refined what became the B-25A.  B-25Bs, embarked aboard USS HORNET, CV-8, carried out the famous Doolittle Raid in April 1942.  The B-25 rapidly evolved over several variants, and the B-25J was the definitive, most numerous, and final production version of the Mitchell.  Of the 10,000 B-25s produced, over 4,300 were B-25Js.  The B-25J was certainly highly adept in the Mitchell’s trademark medium bombing mission, but the B-25J could be fitted with up to 18 machine guns, most of them forward facing.  Such armament configurations allowed the B-25J to functionally serve as a ground-attack gunship as well.

Most B-25s were deployed throughout the Pacific theater and fought against Imperial Japanese forces, from Japan’s Home Islands to the Aleutians, New Guinea, Burma, China, and India.  B-25s operated in the European theater, but mostly with the RAF and the Soviet air force.  In USAAF service, B-25s in Europe largely involved their participation in the Mediterranean region and at some forward operating locations in France following D-Day.

Strengths:  As with many limited-edition kits by Eduard, a high-quality injection-molded kit is paired with Eduard detail parts and decals.  In this case, the 2003-era 1:72 scale Hasegawa B-25J kit remains today as good as it was on the day that it was released. Hasegawa’s small-scale Mitchells have aged quite well.  The kit has earned a solid reputation for its excellent fit and straightforward construction.  Hasegawa’s B-25J possesses very good exterior detail (especially for 1:72 scale) in the form of delicately recessed panel lines, rivets, and fasteners.  Overall, it is not overly complex and can be built fairly quickly.  Among other smart features, the kit features substantial wing spars that serve as sturdy wing attachment and alignment aids.  The Hasegawa B-25J also features a complete interior, from the nose section to the cockpit, a good but somewhat basic bomb bay, waist section, and tail gunner’s position.  The interior detail is quite reasonable for injection-molded plastic.  Construction options include open or closed fore and aft crew doors and open or closed bomb bay doors.  Two 500-pound bombs are included to hang from the bomb racks.  The clear parts feature excellent molding and optical quality.

The limited-edition items included here add significantly to the base Hasegawa kit.  The pre-painted photoetched parts are great and bring out the details of the instrument panel in ways that very few scale modelers could do on their own, particularly in this scale.  The pre-painted belts are, as usual for Eduard, impressive and well done, especially for 1:72 scale.  The six individual throttle, prop and mixture controls that comprise the throttle quadrant are represented as very nicely executed PE parts.

Other PE items include the nose compartment sidewalls, nose gun ammo belts, rudder pedals, the cockpit center console, crew hatch access details, landing gear details, engine ignition wires, antennas, and multiple antenna masts.  The single-piece cast resin Brassin wheels add another really nice touch and are far superior to the detail in the plastic parts.  Finally, there’s Eduard’s pre-cut self-adhesive masking set.  The front end of the B-25J was a “flying greenhouse.”  Use of this masking set will save a scale modeler a lot of time and effort with a payoff involving precisely masked clear parts that will look great.

The markings options are all excellent, and the decals look to be very printed using Eduard’s wet transfer style of decal. The printing is excellent and the fidelity of detail is very impressive, especially in the examples of nose art.  Each scheme is very inviting (practically inspiring).  Also note that extensive airframe stencils are included.  The titular all-metal Angel of Mercy and She’s Engaged are both very appealing schemes.  The same can be said for Naughty Nancy and the “Terrible Tigers” nose art scheme from the 823rd BS in Morotai, Indonesia.  These preferences reflect only my personal inclinations as a scale modeler.  Further, take a few minutes to read the detailed descriptions of each one of the markings options.  Eduard’s research team, as always, conducted a great deal of in-depth study on the history of each of these airplanes.  This fact is reflected in the detail and accuracy of the markings options, and whenever possible, the written narratives accompanying the markings guides extend to include poignant stories and the fates of their crews.

Weaknesses:  Only a few minor critiques can be offered.  The instructions note that nose weight is needed, but exactly how much is not specified.  Likewise, the instructions appear to overlook how to position the bomb bay doors in the open or closed positions, but frankly, any scale modeler building this kit can figure that issue out with ease.

Angel of Mercy is an excellent offering from Eduard.  You cannot go wrong here: it combines Hasegawa’s excellent B-25J with Eduard detail parts and an outstanding selection of markings options.  If you seek more detail, Eduard also produces a range of detail sets for this kit and range from exterior and bomb bay PE detail sets to Brassin 250-lb. 500-lb, and 1,000-lb bomb sets and an M-2 Browning machine gun set.  However you choose to proceed, Angel of Mercy represents a great combination of fit, detail, markings options, and historical narrative that is a unique combination.