Published by Ammo of Mig Jiménez, 2016 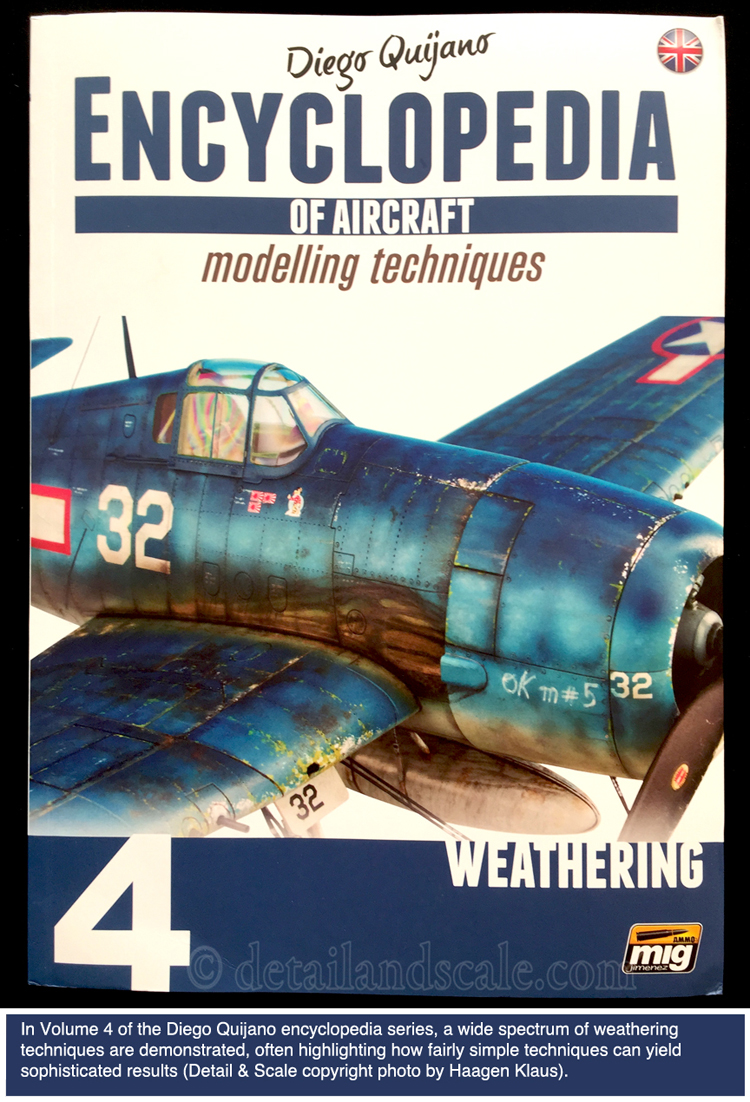 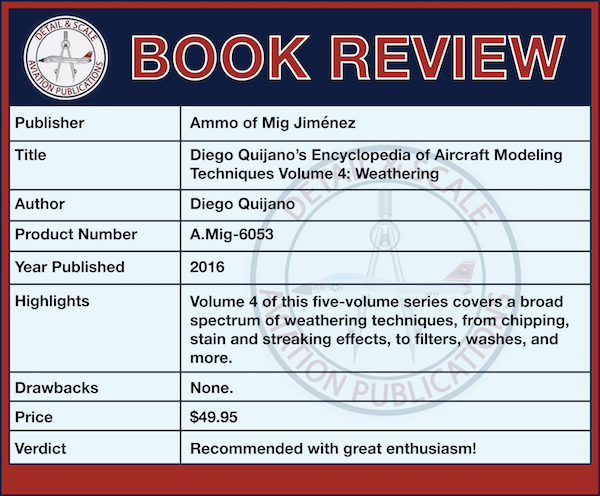 The fourth installment of Diego Quijano’s five volume modeling techniques encyclopedia picks up where Volume 3 left off: weathering scale model aircraft.  This highly informative and illustrated book takes readers through many diverse processes of how to achieve these effects.  Considering that Quijano and his colleagues (whose work is also presented throughout the book) represent what I consider to be the “Spanish Masterclass” of aircraft painting and weathering styles that are simultaneously subtle and sophisticated, I’ve been pretty eager to read this installment since its release was first announced.

Volume 4 maintains the same level of production quality as the previous volumes and gets an A+ in this respect.  This 159 page volume is printed in Spain, and comes in full color on high quality paper.  The images are technically flawless and represent some of the best scale model photography out there.  And, just as with Volumes 1, 2, and 3, the text is thoughtfully written to speak to novices and advanced modelers alike.

The book starts out with how to prepare your model for weathering – namely, how to protect your paint job from what you’re about to do to it, and getting the proper range of tools assembled for the work ahead.  The following section on paint chipping falls in line with what readers learned in Volume 3 regarding the use of chipping fluids, but in Volume 4, the techniques are geared towards even finer production of paint chips.  Still, tried-and-true techniques involving brush painting are also illustrated, along with sponge chipping and pencil chipping.  Metallic silver colored pencils can indeed go a long way.  I also found the section on pitting and scuff marks demonstrated on the bottom of a drop tank using a combination of airbrushing and colored pencil work to be just brilliant.

A technique involving what are called “Filters” is also described.  This was something new to me, and after reading through this section, I’m intrigued.  Filters involve a highly diluted layer of a different color of paint than the underlying base coat.  Application of filters over specific panels of other areas is a way in which one can add subtle gradients of contrast and color variation to an otherwise monochrome paint job.  Quijano demonstrates this using the Mig Ammo line of filters, and to my knowledge, no one else manufactures similar products.  Following application of an acrylic gloss varnish, filters can be brushed on to a surface to achieve the desired range of tonal variations.

Dirt, grime, and worn paint effects are demonstrated using thinned enamel paints, first applying them with a large and stiff brush and later being blended in using smaller brushes.  This is demonstrated on examples from a WWI Hisso to an F/A-18 Hornet, and even on natural metal finishes to produce a mottled finish.  Mottled spots are shown as mimicking dirt and stains on surfaces.  This is particularly effective as shown on some WWII and modern US Navy jets.  Another very interesting and thoughtful technique is oil dot fading, where combinations of colors (some that you might not instinctively think about using) are blended back and forth in the direction of airflow.

Weathering of highlights and shadows are shown using more Mig Ammo products such as blending in panel line washes and highlighting effects on natural metal finishes that really, really work.  Straight-up panel line washes are also illustrated using enamel-based Mig Ammo washes and pencil panel lines (the latter of which is my preferred technique for the last 20 years).  Panel line wash techniques crossing multiple colors, such as on a multicolor camouflage scheme, are also described, and oil and enamel wash techniques are shown to highlight or outline other surface details such as grills, vents, and hinges.

General wash techniques are shown as an effective method in weathering a specific component of an airframe with irregular or complex stain patterns using thinned oils and enamels.  This section walks the reader through the process of application, blending, and softening, and wet-surface washes.  Streaking grime effect are covered next, from the more subtle to heavier staining effects.  Most of the time, we think of streaking effects as following in the direction of airflow, but vertical streaking effects including rain marks on the exterior of an airplane are also demonstrated – they’re a really neat technique!  Oil and other fluid spill effects are also covered, and I find the rather sophisticated ways that blending is demonstrated to be particularly enlightening, though a few examples shown on a Spanish F/A-18 seems a bit overdone.

Exhaust pipes on piston engines can vary widely in color, texture, and even degrees of oxidation (rusting).  The use of Mig Ammo pigments are shown to come in handy here.  I’ve also never seen such effective exhaust pipe rust effects demonstrated.  Where there’s exhaust pipes, there’s exhaust stains, and various heavily thinned Tamiya paints are used to airbrush very thin layers of exhaust stain patterns, and in terms of technique, slow, systematic application of very thin layers are emphasized.  Pigment based exhaust stains are also demonstrated.  Oil streaks, especially those that show up as light staining on dark backgrounds, such as on a dark blue F6F Hellcat, are demonstrated as a combination of airbrushed and oil wash stains, are really visually effective, though as illustrated, might be a bit too strong.

Graphite-based weathering effects are perhaps a bit more my style, as they are more restrained in effect.  Blended/smeared pencil lines to powdered graphite are shown to achieve various effects (a little bit goes a long way).  Another section is dedicated to weathering just with pigments (basically ground up pastels) and really drive home the point that with careful application and blending, some very impressive results can be obtained.  The same can be said for the use of color pencils, whose use goes beyond chipping or streak marks.  Wet application of watercolor pencils – a technique I’ve never seen until now – is really quite interesting.  Again, I’ve got to try this.  The book closes with extreme weathering techniques demonstrated on an abandoned Mi-24, Fw 190, and F7U, giving readers a guide on how to really bang up an airplane model if they are of the mind to do so.

The only shortcoming that I can consider for this volume is that the section on chipping and chipping fluids overlaps significantly with Volume 3.  Still, this section fits logically in Volume 4, too, so it’s not too repetitive.

Volume 4 of Diego Quijano’s Encyclopedia of Aircraft Modeling Techniques continues the sequential narrative in the first three books.  You’ll find a variety of useful techniques and a clear, well-written text.  These books are pricey, but when you start reading and working with them, you’ll see that they are a high-value, high-return investment you’ll use for as long as you build scale model airplanes.  Whether you choose to incorporate only some of these weathering techniques into your repertoire or if you’re chasing that “Spanish Masterclass” style, Volume 4 will enhance your conception and skills when it comes to weathering.  Next up: the last installment in this series: Volume 5 – Final Steps.
Many thanks are owed to Mig Jiménez and Iain Hamilton for the review copy of Volume 4.  Mil gracias y muchos saludos!

Volume 4 of the Encyclopedia of Aircraft Modeling Techniques is recommended without reservation. You can get a copy at the following sources: