Published by Ammo of Mig Jiménez, 2015 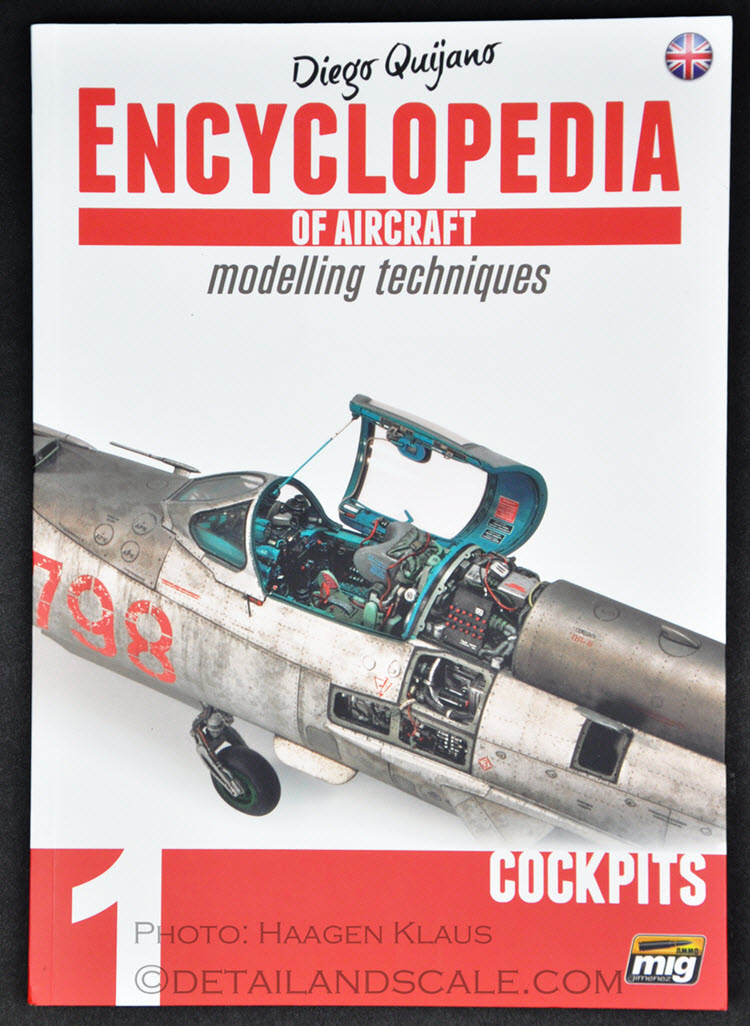 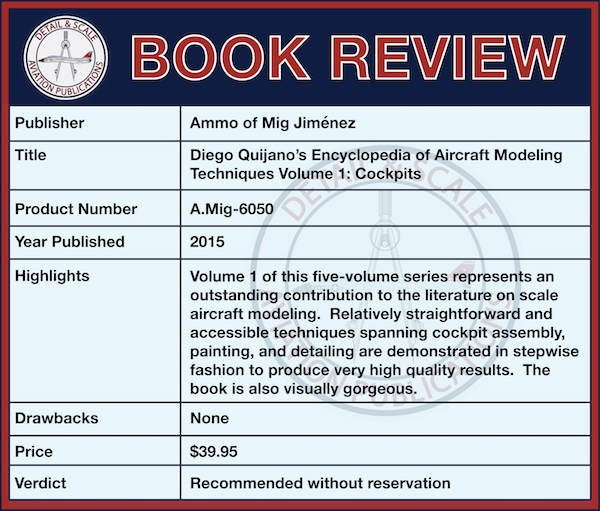 Diego Quijano is a well-known modeler from Spain. His work has been broadly published and he is widely regarded as a world-class master modeler.  In many ways, Quijano’s work epitomizes what can be called the “Spanish School” of scale modeling – a style that involves flawless construction, high levels of detail, and striking finishes. Quijano originally planned a single book covering the construction process of five models, but then a collaboration formed between Quijano and Mig Jiménez. A five volume series was born, spanning a total of 750 pages and 3,500 photos. At the time of this writing, volumes 1, 2, and 3 have been released. It was with great interest that Detail & Scale received the book Diego Quijano’s Encyclopedia of Aircraft Modeling Techniques 1: Cockpits. This review will take a look at the first book in this five-part series.

Volume 1 receives an A+ for production quality.  It is printed in full color on high quality paper.  The images are crystal clear, and on just those grounds alone, readers will enjoy these books for their outstanding scale model photography. The graphic design and layout is virtually flawless. In other words, these books are truly nice on the eyes and are visually engaging. The text and content is written to a very broad audience. It is accessible to novices and advanced modelers alike.  More on that point later.

Volume 1: Cockpits is 128 pages long and contains 500+ photos. It is organized into two parts.  Part 1 covers the tools that a modeler needs along with the basic preparation of parts.  Part 2, is divided into three subsections dedicated to the building, detailing, and painting of simple cockpits, advanced cockpits, and wooden cockpits.

Part 1’s exposition on scale modeling tools and supplies is very thorough, covering all the basic tools that are required for modeling.  Quijano also covers the variety of putties, glues, polishing compounds, masking materials, paint brushes, cutting mats, rotary tools, and the most basic scratchbuilding material – styrene sheet, tubes, rods, electrical wire, and so on. The discussion of paints and thinners touches on the varying virtues of lacquers, acrylic lacquers, enamels, acrylics, and Alcad among others. Weathering products from colored pencils to washes and oil paints are described.  Part 1 also contains a detailed tutorial on removing parts from sprues and eliminating seam lines.

The section on removing ejection pin marks was particularly valuable.  These little scourges are often overlooked or ignored, but they are are an artifact of the manufacturing process that should not be there.  Five separate approaches to eliminating ejection pin marks are demonstrated.  For one, the use of a fiberglass pencil to reach the more inaccessible ejection pin marks is interesting (just make sure not to inhale the fiberglass pencil shavings or get them in your eye!). Also, mixing in pigment with my superglue is a neat way to track the progress in sanding filler until smooth.  Many modelers drop superglue or Mr. Surfacer into an ejection pin mark, sand, prim, find defects, sand again, prime again, fine more defects again, and so on.  Pigment tinged filler looks to avoid all that extra work, and it renders the dried superglue softer and easier to sand.

Part 2 starts with simple cockpits – in other words, out-of-the-box cockpits.  A variety of different techniques are demonstrated from how to effectively employ kit-supplied decals for instrument panel detail to hand painting dials and instrument needles.  Step-by-step painting of cockpit tubs covers applications of base coats to washes and highlighting.  Using an ACES II ejection seat, Quijano demonstrates the conceptual and practical technique of achieving a truly three-dimensional look to a part: a base color plus two highlights and a shadow. He also walks modelers through the use of kit-supplied seat belts, be they decals or photoetched metal. Cockpit detail painting and weathering techniques are also examined.  Seam filling and masking of simple canopies is next. Creating a seamless transition between clear parts and the rest of a model is tricky if not sometimes perilous. Quijano demonstrates canopy seam filling methods in detail.

The section on advanced cockpits covers aftermarket resin cockpits, scratchbuilding cockpit details, advanced cockpit and seat painting (from props to jets), how to do good HUDs, and painting of pilot figures.  There’s a great deal of information here.  Among other points, techniques involving use of epoxy putty are demonstrated to fill in the gaps between a resin cockpit and the kit. Also, Quijano demystifies scratchbuilding cockpit elements, as great detail emerges from only a few basic elements: styrene strip, tube, and metal wires.  A few examples are sequentially carried through the construction and painting process, including a stunning 1:72 F/A-18 cockpit and a 1:48 F-104 instrument panel.  Readers will also get a lot of generally good ideas regarding technique studying the painting process of a 1:48 Zero that covers several pages. There’s also what might be the greatest ever execution of masking tape seatbelts demonstrated on an F-104 C-2 ejection seat and Se.5 Hisso seat (p.80-81). Advanced canopy work involving multiple techniques to remove the centerline mold line and polishing and buffing clear parts are clearly demonstrated. The painting techniques used to bring out the details of a pilot figure are also clearly explained. In this case, Quijano shows readers how to transcend the featureless olive drab flight suit of a modern jet pilot, but such techniques can be used in pilot painting of any era.

While the previous sections are very strong, readers may be most impressed with how to achieve realistic wood cockpits – whether or not they model early aircraft. For many modelers, wood grain effects have been perceived as challenging or involving some special knowledge or skill known only to a select few.  Here, Quijano demonstrates simulating wood grain through a variety of techniques that virtually anyone can do using enamels or acrylics, watercolor pencils, and decals. These techniques special, but are not specialized. Readers are carefully walked through each of these methods.

I can find no meaningful points to critique.

In conclusion, Volume 1 of Diego Quijano’s Encyclopedia of Aircraft Modeling Techniques has raised the bar on scale aircraft modeling how-to books.  It is very impressive, brimming with excellent ideas, excellent techniques, and an easy-to-read narrative.  There are only a few typos and grammatical glitches, but they’re not serious. The original manuscript was written in Spanish and translated into English, and the generally excellent translation underscores another dimension of care and effort that the Ammo team put into the production of this book’s multiple language editions. Priced at about $40, Volume 1 is more expensive than other books on scale modeling. The quality of the book and the information inside is worth it. Consider it an investment.

Indeed, the modeling style is quintessential Diego Quijano.  If readers seek to emulate this style, this book (and the others in the series) will help you get there.  If such a style or “look” is different than what other readers seek to achieve in their work, these books are still just as useful. As mentioned earlier, Quijano and Jiménez explicitly designed these volumes speak to people with a wide range of skill sets. Volume 1: Cockpits holds many useful techniques and examples for modelers to enthusiastically experiment with and integrate into their personal repertoire and style.

Many thanks are owed to Mig Jiménez and Iain Hamilton for the review copy of Volume 1.  Mil gracias y muchos saludos!

Volume 1 of the Encyclopedia of Aircraft Modeling Techniques is recommended without reservation. It can be found for sale at the following sources: