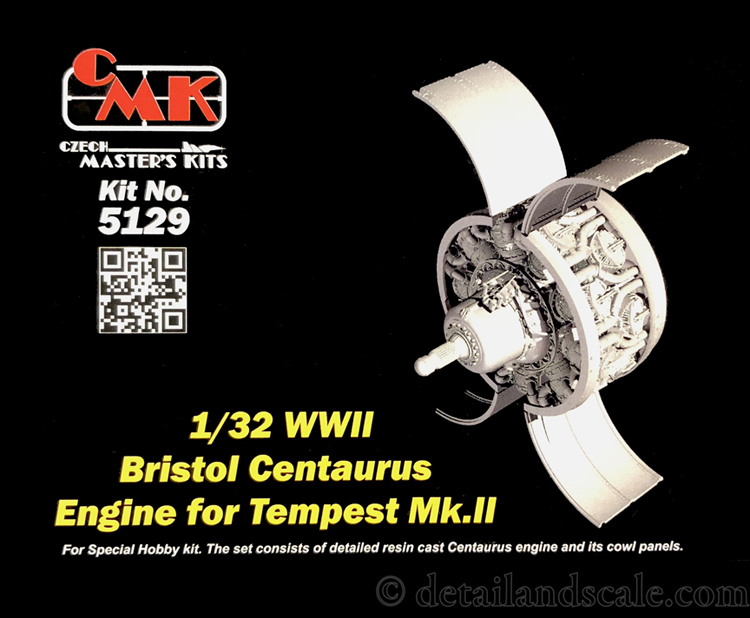 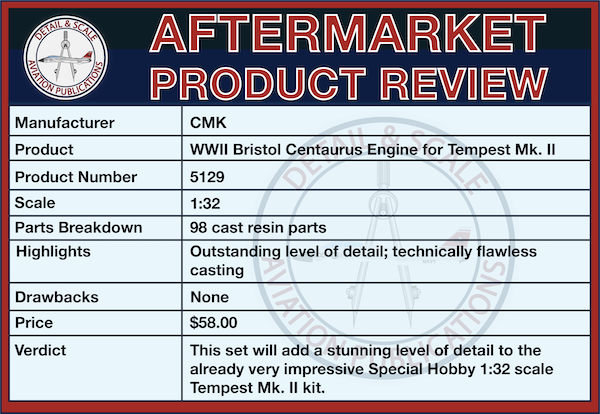 The Bristol Centaurus was the final development of the Bristol Engine Company’s series of sleeve-valve radial aircraft engines.  The Centaurus was an 18-cylinder, two-row design that eventually delivered over 3,000 hp.  As such, it was one of the most powerful aircraft piston aircraft engines in history.  Introduced into service late in the Second World War, it was seen on aircraft for many years to come.  Centaurus powerplants were eventually produced across 20 variants and were fitted to aircraft as diverse as the Vickers Warwick, Bristol Brigand and Buckmaster, the Sea Fury, Blackburn Firebrand, and postwar civilian airliners.  The Centaurus V was at the heart of the Tempest Mk. II design.  It delivered 2,590 hp driving a nearly 13-foot diameter four-bladed propeller making the Tempest Mk. II one of the fastest fighters of the war and postwar era.

Special Hobby’s release of the 1:32 scale Tempest Mk. II (see our review HERE<link>) continues their very impressive line of large-scale Tempest kits.  The “High Tech” version of the kit is filled with tons of great detail parts, but no engine – unlike Special Hobby’s “High Tech” edition of the Mk. V.  If you wanted to detail your Mk. II with an engine, this detail set is a dream come true.

This is an all-resin set consisting of 98 parts. It is an eye-watering example of casting and the detail contained in the final product will be unbelievable.  The casting is flawless (no defects, warping, or other problems).  The engine’s core is cast up against the firewall as a single piece along with various exhaust pipes.  There’s so much detail, from bolt heads, gasket fittings, and clamps.  Each of the cylinders are beautifully cast as individual parts, and they are rich in detail.  There are also more parts for the front halves of the exhaust pipe system, the reduction gear and reduction gear fairing, and lots of other ancillary engine hardware.

The completed engine should more or less just drop into the kit.  However, to display this impressive engine, the builder will have to remove the kit’s four cowling access panels and replace them with the resin versions in this set.  The lower resin panels even have the cowling latches attached in the “open” position – what a great touch!

I’m not an expert on the Centaurus family of aircraft powerplants, but I did my homework in preparation for this review.  I can’t find any faults regarding its accuracy or manufacture.  This set is straight-up awesome.

Sincere thanks are owed to Special Hobby for the review sample.  You visit them on the web at http://www.specialhobby.info and on Facebook at https://www.facebook.com/specialhobby