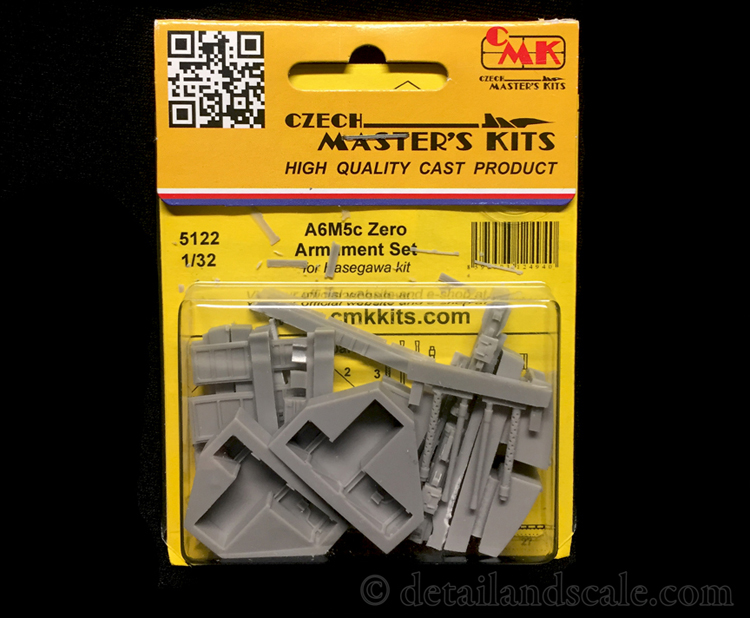 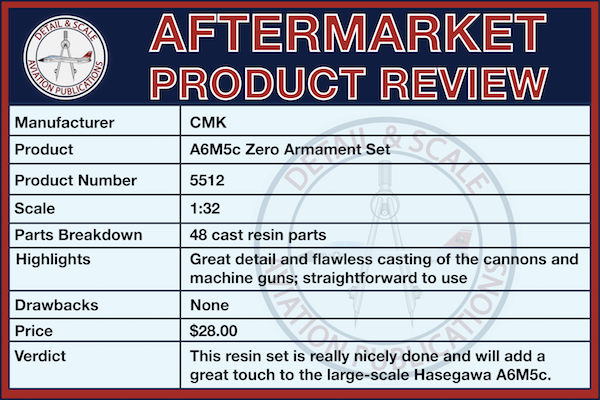 For the first phases of the Second World War in the Pacific, the legendary Mitsubishi A6M Zero was the undisputed master of air combat.  It was a feared opponent that outclassed many of the Allied aircraft that first went up against it, such as the Brewster Buffalo, the Grumman Wildcat, and the Curtiss Warhawk.  Zeros took down many opponents with a combination of two 20 mm cannons and two 7.7 mm (.303 caliber) machine guns. Of course, the tide began to turn by 1943 with new Allied tactics and airplanes, and soon, the Zero became increasing obsolete, outgunned, and outperformed as the war in the Pacific progressed.

The A6M5c was one of the variants developed later in the war and first flew in 1944. It was best suited for intercepting B-29s as its heavier weight degraded its dogfighting performance.  The 7.7mm machine guns were deleted and replaced with a pair of 13.2 mm (.51 caliber ) Type 3 machine guns in each wing outboard of the cannon.  This set of cast resin parts allows the scale modeler to open up the cannon and machine gun bays of the 1:32 scale Hasegawa A6M5c.

The overall quality of this set is excellent.  Casting is flawless, and the parts have all the detail one expects from a CMK offering.  The bay details look quite convincing, the details of the cannon and machine guns and barrels are great, and the internal and external details of the bay access panels are spot-on.

This set will bring even more detail to the large-scale Hasegawa Zero.  There are also several additional sets for the A6M5c by CMK, from landing flaps to wheels and wheel bays.  For the detail-oriented scale modeler, these CMK sets have your Zero covered.

Sincere thanks are owed to Special Hobby/CMK for the review sample.  You visit them on the web at http://www.specialhobby.info/ and on Facebook at https://www.facebook.com/specialhobby