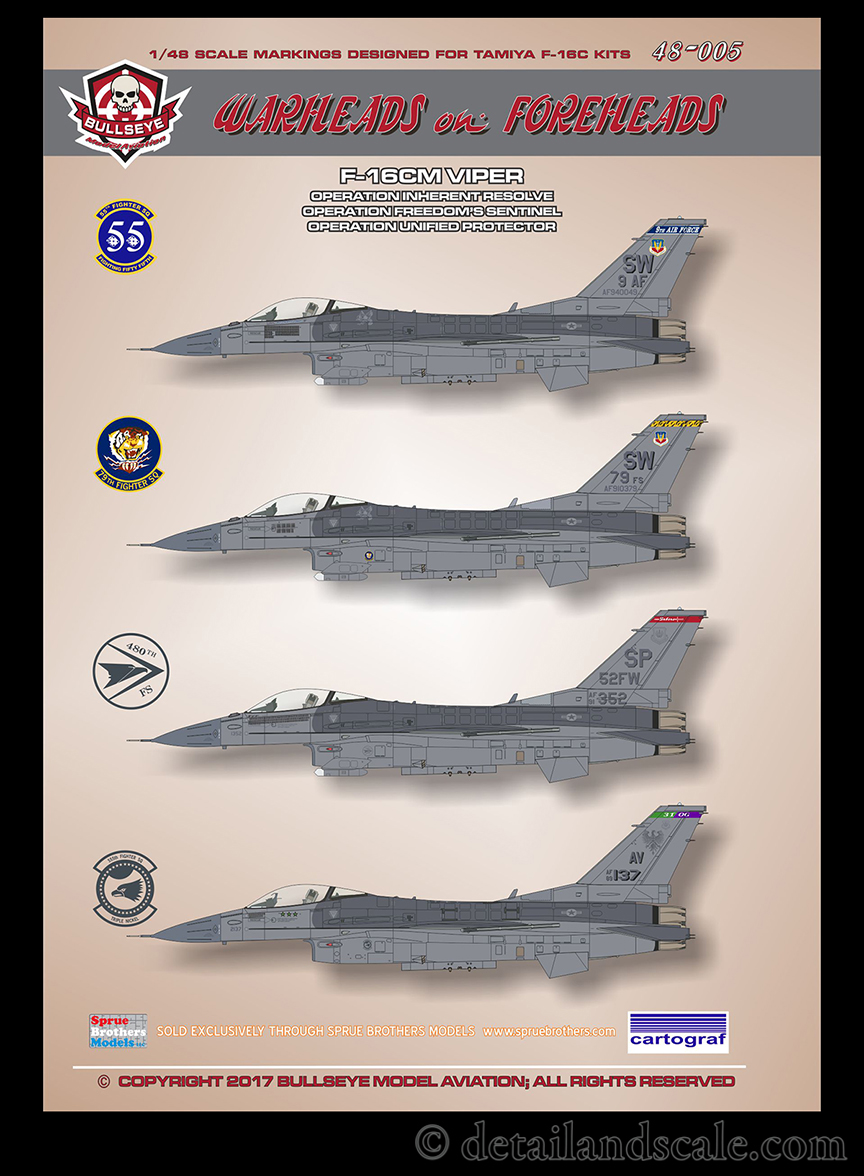 The early 21st century witnessed the Global War on Terror, following September 11th, 2001, along with a number of related actions.  Operation UNIFIED PROTECTOR was launched in 2011 as part of the NATO action that helped overthrow the Gadhafi regime in Libya.  Operation INHERENT RESOLVE was initiated in 2014 to defeat the Islamic State of Iraq and Syria, or ISIS.  Operation ENDURING FREEDOM transitioned to Operation FREEDOM’S SENTINEL in 2015 as the continuation of the conflict in Afghanistan.  The General Dynamics (now Lockheed) F-16 Fighting Falcon has been there through it all, serving as a multirole workhorse throughout these conflicts, striking all manner of enemy forces and putting “warheads on foreheads” using a wide variety of precision guided munitions.

These decals are carefully sized to precisely fit on the Tamiya F-16 Aggressor kit or any other C-model boxing.  These schemes can be adapted with little to no effort to the Hasegawa or Kinetic family of kits, but some trimming needs to be done with the walkways with those other kits.  The in-flight refueling panel lines on the Hasegawa kits are not quite accurate.  Therefore, the corresponding Bullseye refueling panel decal will need to be used with caution (see the scale modeling notes in the instructions).

Bullseye produces among highest quality decals available today.  The decal design/artwork by Bullseye is outstanding, and it is appropriately paired with decal printing by Cartograf of Italy and who represent the very best in the business.  A very high standard of research and deep F-16 subject matter expertise is reflected in the accuracy of these decals.  This is reflected everywhere, from paint schemes to ejection seat markings, and from squadron badges to tail flashes.  It is a really great cross-section of markings to feature aircraft from the “Shaw Shooters,” “Tigers,”  “Warhawks,” “Gamblers,” and “Triple Nickel.”  All are well-chosen and interesting F-16 schemes, especially the Aviano-based jet which scored three kills in one day over Bosnia in 1994, and which still carries the kill markings.  One of the Spangdalhem jets on the sheet features the low observable HAVE GLASS finish.

Beyond the aircraft-specific markings, a very thorough set of stencils is included for two F-16s.  They feature all the warning markings, walkways, maintenance stencils, and landing gear placards.  No detail is overlooked.

Beyond the extensive markings guides, the instructions also feature a very thorough and complete set of modeling notes for these specific aircraft.  These detail the differences between the Block 40 and Block 50 F-16CJs that were upgraded via the CCIP program to become F-16CMs.  These included the addition of advanced air-to-ground capabilities, BLOS (Beyond Line-of-Sight) radios and SATCOM antennas, use of the Sniper XR pod, and more.  Detailed notes on the unique Block 40/50 -CM airframe features are provided (e.g., differing HUDs, JHMCS sensors, the pairing of the MCID (or or “Big Mouth”) intake with the GE F110 powerplant, landing light, chaff dispenser configurations, and bulged main gear well doors.  References for the placement of the Block 40 “beef-up” or “scab” upper fuselage reinforcement plates are shown (Block 50 and above jets have internal reinforcements).  Two pages are dedicated to pods, bomb racks, missile rails, and weapons loadouts carried by these jets, such as the HARM targeting and Sniper pods, the AN/ALQ-131 ECM pod, BRU-57 bomb racks, Maverick missiles, laser-guided bombs, laser-guided JDAMs, GBU-39 Small Diameter Bombs, and even the WGU-59/B/APKWS II precision guided rocket pod launcher.  A guide to where to source all necessary aftermarket details and ordinance is also provided (though currently, I do not think anyone makes a WGU-59/B/APKWS II pod).

In sum, Bullseye Model Aviation has done a superlative job assembling an impressive range of schemes that capture modern, combat-hardened F-16CMs from over the last decade.  A very broad range of scale modelers will find lots of opportunities and inspiration in this decal set.

We thank Scott Brown at Bullseye Model Aviation for the review sample.  These decals are sold exclusively through Sprue Brother Models at http://spruebrothers.com.