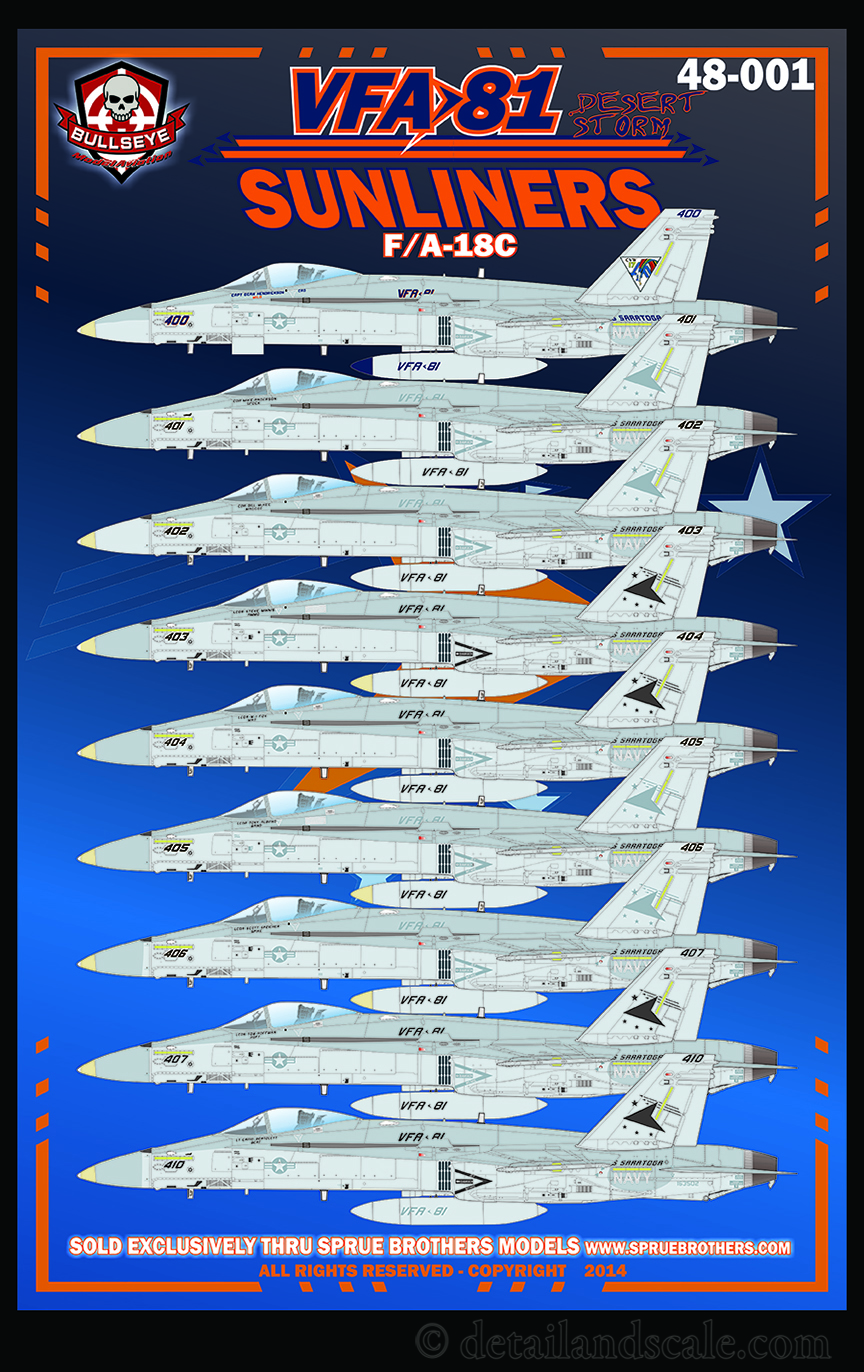 The U. S. Navy committed six aircraft carriers to Operation DESERT STORM, with A-6 Intruders, F/A-18 Hornets, and A-7 Corsair IIs providing much of the Navy’s ground attack capability.  VFA-81 “Sunliners” was one of the two F/A-18C Hornet squadrons assigned Carrier Air Wing (CVW)-17 which was embarked aboard USS SARATOGA, CV-60.  It was VFA-81’s first cruise with the F/A-18C.  The “Sunliners” participated in a number of notable events during the war, particularly on the first day of the conflict – and these are captured on a 1:48 scale decal sheet produced by Bullseye Model Aviation.  This is a decal sheet that tells a story.

On the afternoon of 17 January 1992, a strike package consisting of four VFA-81 jets launched from SARATOGA.  They were armed with an ultra-heavy loadout of four 2,000-pound Mk. 84 bombs.  Their target was the H3 airfield in western Iraq.  At 30 miles out, an E-2C Hawkeye alerted the flight that bandits had been spotted just off their nose, and they were closing at Mach 1.2.  LCDR Mark Fox (flying Sunliner 401) and LT Nick Mongillo (piloting Sunliner 410) split off from their formation to intercept the targets: a pair of MiG-21s.  Though their aircraft and weapons systems were configured for the bombing mission, Fox and Mongillo switched to air-to-air mode by thumbing a single knob on their control sticks.  The bogeys were locked up and missiles were fired at a range of 10 miles.  Both MiGs were destroyed.  Only 40 seconds had passed since the E-2C’s initial call.  The Hornets then turned their attention back to the airfield, as each jet dropped 8,000 pounds of ordnance and returned to SARATOGA.  This engagement provided the only U. S. Navy kills against fixed-wing opponents during the war.  More importantly, it amply illustrated the Hornet’s versatility as a multirole strike-fighter when it mattered the most.

Later that night, a strike package of six VFA-81 F/A-18Cs targeted Al Taqaddam air base (and included Sunliners 401 and 410, refueled and rearmed).  During the mission, LCDR Scott Speicher was shot down over a vast and practically uninhabited stretch of desert.  He was flying F/A-18C, BuNo. 163484, Sunliner 403. Initial speculation was that he was downed by a surface-to-air missile.  Later investigation revealed that it was an air-to-air missile fired from a MiG-25PDS flown by LT Zuhair Dawood of Iraq’s 84th Fighter Squadron.  Speicher’s fate was unclear and contested, with his status going from MIA to KIA/BNR (Body Not Recovered) to Missing/Captured, and back to MIA.  Telltale signs that he had been apprehended – but never released by the Iraqis – fueled hope in the early 2000s that Speicher might still be alive.  The truth finally emerged in 2009 when human remains were located not far from the crash site and positively identified as Speicher, bringing closure to an eighteen year-long search for answers by his family and fellow “Sunliners” who keep his memory alive to this day.

These decals are relatively generic in terms of size and shape and do not need to precisely conform to any specific kit configuration.  They can be used on any 1:48 scale F/A-18C, such as the Hasegawa, Revell, HobbyBoss, and Kinetic kits.

Bullseye products are among the highest quality decals available today for scale modelers.  The decal design/artwork by Bullseye is exceptional, and it is appropriately paired with world-class, razor-sharp decal printing by Cartograf of Italy.  A very high standard of research and deep F/A-18 and “Sunliners” subject matter expertise is reflected in the accuracy of these decals.  Many of the pilots on these missions were consulted during the production of this sheet.  Outstanding attention to detail is reflected everywhere, such as noting that these “Sunliners” jets did not have national insignias painted on the wings during the war, and other subtle and idiosyncratic paint scheme and weathering details.  A very thorough set of stencils is included for two Hornets.  These include all the ejection seat warning placards, maintenance stencils, low-voltage formation lights, and landing gear placards.

Beyond the extensive marking guides, the instructions feature a set of historical notes covering the jets involved in the shootdown of the two MiG-21s and Scott Speicher’s final mission.  Detailed research by Bullseye Model Aviation also established the precise weapons loadouts carried by these jets during these missions, including the somewhat unusual asymmetrical carriage of three AGM-88s and two drop tanks on Sunliner 403 as flown by Speicher.

In conclusion, Bullseye Model Aviation has done an outstanding job here – a sincere “bravo-zulu.”  Indeed, these “Sunliners” jets may not be among the most colorful U. S. Navy CAG schemes, but instead, these decals chronicle two very poignant and solemn moments in the 1991 Gulf War.  A very broad range of scale modelers will find many creative possibilities with this decal set.

We thank Scott Brown at Bullseye Model Aviation for the review sample. These decals are sold exclusively through Sprue Brothers Models at http://spruebrothers.com.