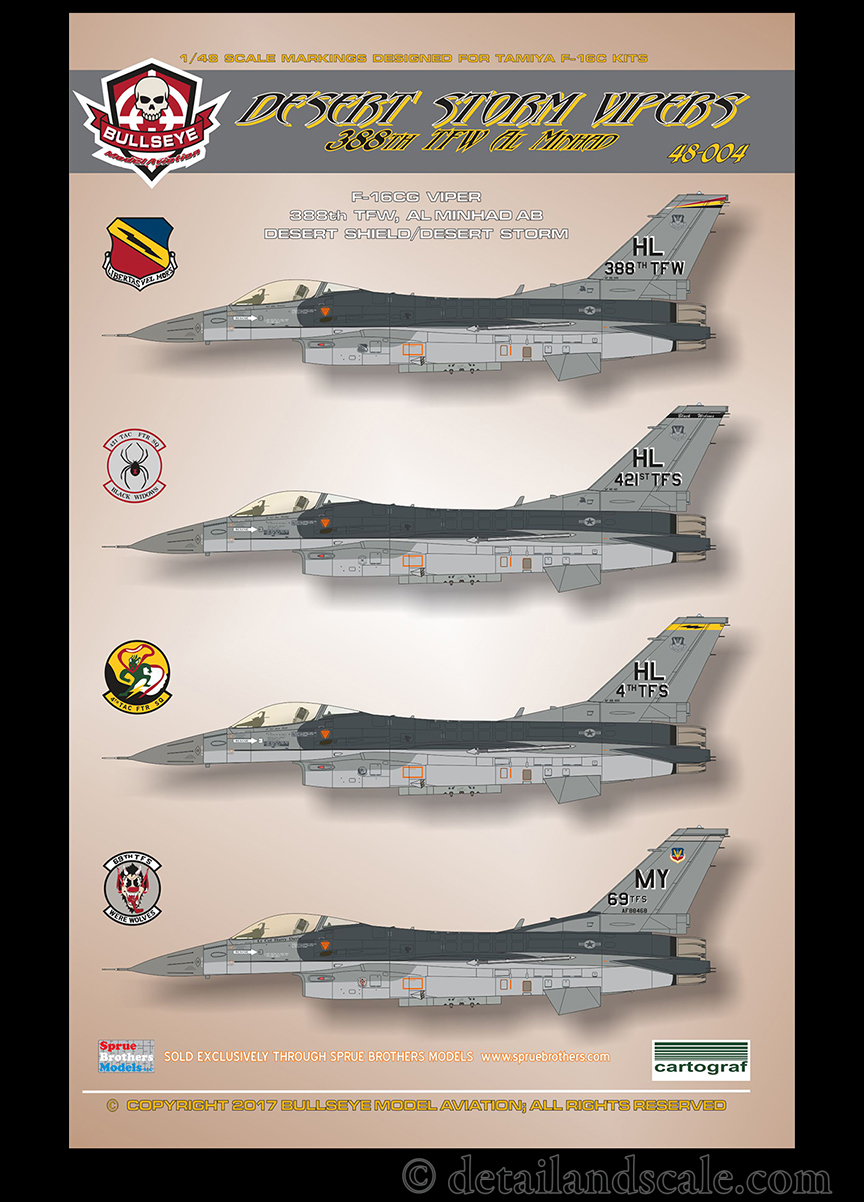 Iraq’s invasion of the nation of Kuwait in August 1990 triggered one of the largest military build-ups – and subsequently one of the most decisive conflicts – of the 20th century.  The F-16 Fighting Falcon was key to the success of Operations DESERT SHIELD and DESERT STORM.  Some of the first F-16s in theater were the F-16Cs of the 4thTactical Fighter Squadron (the “Fightin’ Fuujins) and the 421st Tactical Fighter Squadron (the “Black Widows), both of which were elements of the 388th Tactical Fighter Wing based at Hill AFB, Utah.  They began to depart en masse for the United Arab Emirates on August 28, 1990, and after a 17 hour-long transit marked by 10 aerial refuelings, these jets arrived in the Persian Gulf.  Their initial presence helped deter any further Iraqi aggression.  Then, after settling in, these F-16 squadrons trained intensely for the impending war.  Based at Al Minhad AB, the F-16 from Hill AFB were joined by F-16s from the 69th TFS “Werewolves,” hailing from Moody AFB in early January 1991.  However, the jets from the 69th TFS were redeployed to King Fadh IAP not long after the war began, as their mission shifted to SCUD-hunting.

The Hill and Moody Fighting Falcons were brand new F-16C Block 40 aircraft and had the capacity to employ the LANTIRN system, which was first developed for the F-15E Strike Eagle.  While pods were initially scarce throughout DESERT SHIELD and into the several weeks of the war, these squadrons nevertheless made a significant impact upon the course of the first Gulf War.  They collectively dropped nearly three million pounds of ordnance and developed the highly effective two-ship “Killer-Scout” mission, hitting targets including nuclear plants, SCUD launchers, airfields, troop and armor concentrations, truck convoys, and command and control assets.

This 1:48 scale decal sheet by Bullseye Model Aviation captures a representative sample of the F-16Cs of the 4th, 69th, and 421st TFS during the harrowing DESERT SHIELD and DESERT STORM timeframes.  Markings are provided for the following ten aircraft:

These decals are carefully sized to precisely fit on the Tamiya F-16 Aggressor kit or any other Tamiya C-model boxing.  These schemes can be adapted with little to no effort to the Hasegawa or Kinetic family of kits, but some trimming needs to be done with the walkways.  The in-flight refueling panel lines on the Hasegawa kits are not quite accurate.  Therefore, the corresponding Bullseye refueling panel decal (which is accurate) will need to be used with caution (see the scale modeling notes in the instructions).

Bullseye products are among the highest quality decals available today.  The decal design/artwork by Bullseye is outstanding, and it is appropriately paired with world-class, razor-sharp decal printing by Cartograf of Italy.  A very high standard of research and deep F-16 subject matter expertise is reflected in the accuracy of these decals.  This is reflected everywhere, from paint schemes details to ejection seat markings, and from squadron badges to tail flashes.  Beyond the aircraft-specific markings, a very thorough set of stencils is included for two F-16s.  They feature all the warning markings, walkways, maintenance stencils, and landing gear placards.  Nothing is missed.

Beyond the extensive markings guides, the instructions also feature a very thorough and complete accurate set of history notes covering the participation of these three squadrons in the conflict.  Modeling notes for these specific early Block 40 aircraft include detailed notes on the unique Block 40 airframe features (e.g., presence of the WAR (Wide Angle Raster) HUD, MCID (Modular Common Inlet Duct), or “Big Mouth” intake paired with the GE F110 powerplant, landing light and chaff dispenser configurations, and bulged main gear well doors.  An entire page is dedicated to DESERT STORM-era weapons loadouts carried by the jets of the 4th, 69th, and 421st TFWs and even include a painting and markings guide for typical weapon appearance over this timeframe.  A guide to where to source aftermarket Block 40 wheels and the various types of ordinance is also provided (though currently, the excellent Shull24 product line is no longer in production).

Of note, the sheet is dedicated to the memory of LT Michael “Chins” Chinburg, a 4th TFS pilot who lost his life in a training sortie during Operation DESERT SHIELD.

The instructions also recommend the book Vipers in the Storm by Keith “Rosey” Rosenkranz, who was a 421st TFW Viper driver.  I read this book about ten years ago, and it was indeed very personal and intense recounting of the war to include the jets on this decal sheet.  I second this recommendation.  It is a riveting book, indeed.

In conclusion, Bullseye Model Aviation has done an outstanding job assembling an impressive ensemble of Gulf War F-16s that faithfully represent their subject matter.  A very broad range of scale modelers will find lots of creative opportunities in this decal set.

We thank Scott Brown at Bullseye Model Aviation for the review sample. These decals are sold exclusively through Sprue Brothers Models at http://spruebrothers.com.