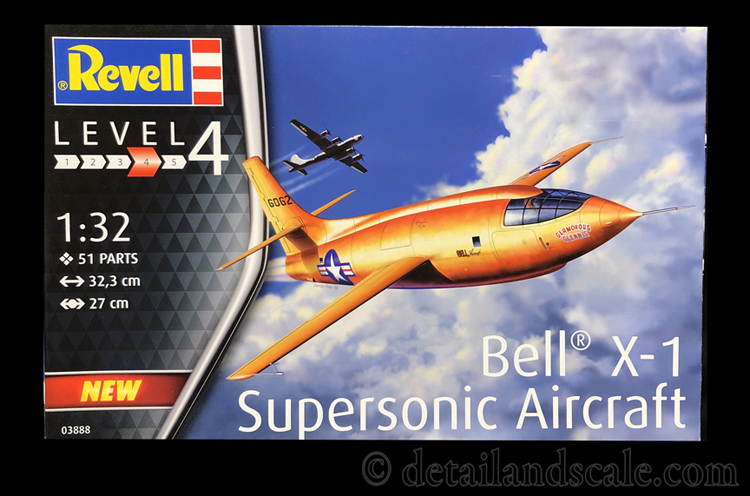 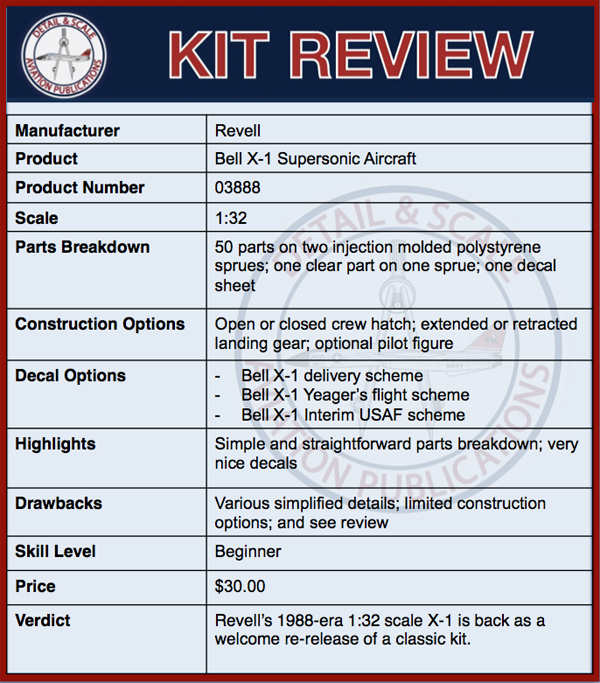 Among the milestones of human flight, the Bell X-1 breaking the sound barrier in 1947 ranks probably second only to the first flight of a heavier-than-air flying machine by the Wright Brothers in 1903.  Not only did it make supersonic flight routine, the event opened the door to the exploration of low Earth orbit and far beyond.  In this review, we take a look at Revell’s reissue of their 1988-era 1:32 scale kit of the X-1.

By the mid-1940s, aircraft such as the Hawker Tempest and Dornier Do 335 were reaching the absolute speed limits of straight-wing, piston-engine aircraft in the high subsonic range.  As early as 1942, the United Kingdom launched a top-secret project to develop the world’s first supersonic aircraft to be powered by a turbojet.  Following the sharing of research data with the U. S., Bell Aircraft of Buffalo, New York, took the lead in the development of supersonic flight.

The requirements for the XS-1 (later re-designated as the X-1) were defined in late 1944, and by March 1945, a contract had been signed for three of the experimental aircraft.  The X-1 had a conventional set of straight wings, but the fuselage literally emulated the form of a Browning .50-caliber machine gun bullet, known to aerodynamicists as being quite stable in supersonic flight.  A turbojet powerplant was rejected in favor of a lighter and simpler rocket engine.  Reaction Motors Inc. produced the XLR-11 engine, which burned ethyl alcohol diluted with water with a liquid oxygen oxidizer.  Its four chambers could be individually turned on and off, each producing 1,500 pounds of thrust.  The X-1 was not to take off from a runway (though Chuck Yeager did it once).  Instead, the X-1 would be given a critical head start in altitude and airspeed by being taken aloft by a specially modified B-29, released for flight, and then after the powered-flight segment was complete, it would glide back for an unpowered landing.

Bell Aircraft chief test pilot Jack Woolams took X-1 Number 1 (tail number 46-062) on its first of several unpowered glide-flight over Pinecastle Army Airfield, Florida, in January 1946.  By December, the work moved Muroc Army Air Field, California, for its first powered flights.  After Woolam was killed in a crash of a P-39 in August 1946, Bell test pilot Chalmers “Slick” Goodlin assumed his place until June 1947.  By then, the test program had been incremental, deliberate, and slow.  The USAAF took over the X-1 program, dissatisfied with both the pace of the work and the $150,000 bonus that Goodlin tried to negotiate as a prerequisite to taking the X-1 past Mach 1.

By early October 1947, Captain Charles “Chuck” Yeager had been flying X-1 Number 1 incrementally up to the edge of the sound barrier.  Then, on 14 October 1947, he flew it out to Mach 1.06 for about 18 seconds in level flight.  It was the aircraft’s 50th flight.  By then, transonic compressibility issues had been discovered, and one of the keys to “busting the Mach” was the modification to X-1’s horizontal tail, making it an all-moving flight control surface for improved control authority.  The aircraft was also christened “Glamorous Glennis” in honor or Yeager’s wife.  X-1s continued to probe the edge of the envelope in the years after Yeager’s legendary flight to reach nearly 1,000 mph in 1948.  The subsequent Bell X-1A pushed past Mach 2.4 and 90,000 feet+ by the mid 1950s.

X-1 Number 1 hit Mach 1.45 as the fastest speed that it ever attained during a flight by Yeager in March 1948.  In August 1949, USAF Major Frank K. Everest, Jr., took X-1 Number 1 on its highest-ever flight up to 71,902 feet.  In the summer of 1950, Air Force Chief of Staff General Hoyt Vandenberg presented X-1 Number 1 to the Smithsonian Institution following a career of 78 test flights.  It was enshrined in the Milestones of Flight Gallery at the Smithsonian’s National Air and Space Museum where it has been seen by millions of visitors since.

Strengths:  Revell first issued this kit in the 1988 “Yeager SuperFighters” series of kits.  While the box top says “New,” this is the same tooling seen in the 1988, 2003, and 2011 Revell issues of this kit.  The only thing new here, technically speaking, is the decal sheet.

The small X-1 seems at home in 1:32 scale.  This is a relatively simple kit, consisting of just 51 parts.  The kit shows it 1980s vintage in many ways, from the conventional parts breakdown to the raised panel lines.  The X-1 was also a pretty simple aircraft by many standards.  However, the cockpit is relatively well detailed with a good control column, rudder pedals, left sidewall, and seat.  There’s also a good oxygen regulator and hose.  Flight instruments are represented by decals.  The cockpit hatch is separate and can be depicted as removed or attached (open or closed).  The kit also includes a decent looking XLR-11 rocket motor, but everything except the exhaust nozzle disappears inside the airframe when the fuselage halves come together.  Also, don’t forget that this model needs about 20 grams of nose counterweight so as not to sit on its tail.

A good refence for X-1 cockpit details can be found HERE.

The decals by Zanchetti look absolutely top notch, and resemble Cartograf in terms of quality, colors, register, and print quality (there was a time some years ago when Zanchetti decals were really quite poor, so it’s very nice to see their work improve).  I like the choice in markings, and while Yeager’s flight scheme is legendary, the later white-over-orange test scheme is also quite appealing.  It’s different and not monochrome orange.

Weaknesses:  This kit can be made into a very nice representation of the X-1.  The raised panel lines are sure to disappoint some scale modelers, but the simplicity of the X-1 means it could be a relatively straightforward process to re-scribe the lines for those who really care.  The X-1 also had its share of rivet and fastener details, all of which are missing here.  There are also some poorly placed ejector pin markings in places such as gear well doors and the cockpit hatch.  Lap belts are molded in very indistinct low relief in the seat pan, and the Chuck Yeager pilot figure could be called “very 1970s/1980s” with the famous aviator divided into front and back body halves and left and right head halves.  He will require some clean-up, for sure.

Revell’s 1:32 scale X-1 is a good representation of the legendary X-plane.  It can build well just out-of-the-box, and for those interested in adding more details or features, you have a canvass to create something special here.