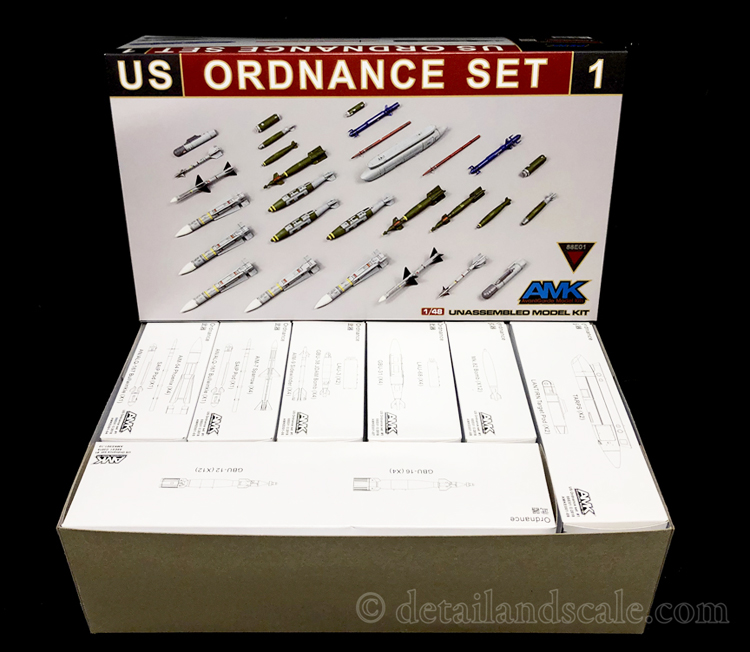 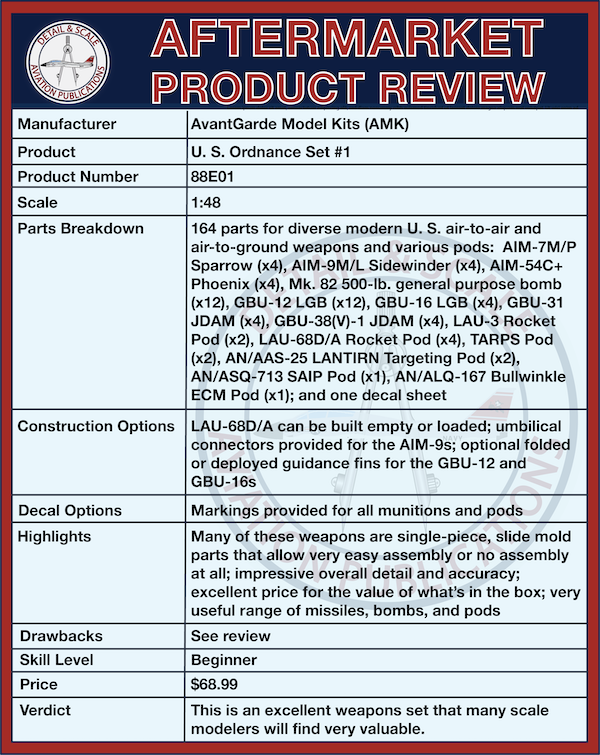 The weapons hanging off a scale model aircraft can enhance its appearance in many ways or are vital to tell a story.  Most injection molded kits of modern combat aircraft come with an assortment of air-to-air missiles, air-to-ground weapons, and various pods and other stores, but detail and accuracy is often lacking, or the external stores you’re looking for are not included in the kit.  Some scale modelers will seek out cast resin and photoetched replacement sets (your reviewer is very much in that camp).

Here, AMK has released a unique injection molded weapons set that has both great quality and promise.  This set is also literally brimming with weapons.  The detail is excellent overall, and really pushes the fidelity of injection molding to near the edge of its technical envelope.  These missiles, bombs, and pods have also been produced using slide molding technology.  This means that most of these items are single-piece parts or that break down into very simple and straightforward construction processes.

The contents of the weapons set includes:

In a word, this set is impressive.  Many folks will find it to be very, very useful.  The detail here is great, and the ease of assembly is also highly attractive.  The LAU-68D/A pods are the items with the highest parts count, and that’s because each individual rocket tip is a separate part.  The air-to-air missiles cover late 1980s and 1990s jets such as the F-14, F-15, F-16, and F/A-18 with their late generation Sidewinders and Sparrows.  These are really beautiful single piece molded parts – missile bodies, fins, and all the fixins’ including the umbilical connector for the AIM-9s.  Two subtly different radomes are provided for the AIM-7M versus the -P.  The late generation AIM-54C+ used by the F-14D Tomcat is a single-piece missile featuring a drop-in exhaust nozzle.  You can also use it for a standard -C model Phoenix, as well.  As far as I know, the differences between the two were internal.

The precision-guided air-to-ground ordnance is equally impressive.  The twelve Mk. 82 “slicks” are very nice single-piece bombs.  The 2,000-lb. JDAMs feature a separate single-piece tail cone assembly.  Here, the inner lip of the tail cone is recessed, so it plugs in seamlessly and securely into the hollow bomb body.  The 500-lb. GBU-38(V)-1s are single piece parts.  The GBU-12 and -16s have optional tailfin assemblies: one set has the tailfins stowed and the other has the tailfins extended, which is how they look in flight after the bomb is dropped and is guiding towards its target.

The pods included in this set are the TARPS camera pod used exclusively by the F-14 Tomcat and the late-style AN/AAS-25 LANTIRN targeting pod used by the F-14 in its final years.  The AN/ASQ-713 SAIP Pod, better known as an ACMI pod that transmits instrumentation data during training missions is another nice touch.  The AN/ALQ-167 Bullwinkle ECM Pod is pretty rare in scale modeling form, but has been used on aircraft such as the F-14, F-15, and F-16 in both training and operational combat roles.

The decal sheet appears to have been printed in-house by AMK and looks really good.  A few nice touches – the serial numbers (or SERNOs) for the AIM-54s are all different.  Many decal manufactures have in the past printed decals with the same SERNO for all the AIM-54s in a set or in a kit, but each missile had its own number.  A little missile trivia here:  the specific frequencies that guided an AIM-54 were individualized to the missile and tied to its unique SERNO; six different Phoenixes with the same SERNO would follow a common data link and guide to the same target no matter what other targets would have been designated by the fire control system.

A few things to note: the bombs have smooth bodies, and that means they are all good for USAF subjects.  Since the 1970s, Navy and Marine Corps air-to-ground bombs have been covered with ablative fire-retardant coatings often light gray in color.  This confers upon them a roughened texture that would be visible even in 1:48 scale.  If you want to convert your AMK bomb bodies to Navy-standards, I have in the past sprayed them with Mr. Surfacer 500 and while its still wet, dab them with a paper towel and set aside till dry.  Also, the particular style of ACMI pod was phased out in the late 1990s and is not current.  The only drawback to slide-molded parts is that there can sometime be a fine raised seam on the missile, bomb, or pod body.  Note where these may be on the various weapons here, and eliminate them with a little bit of sanding.