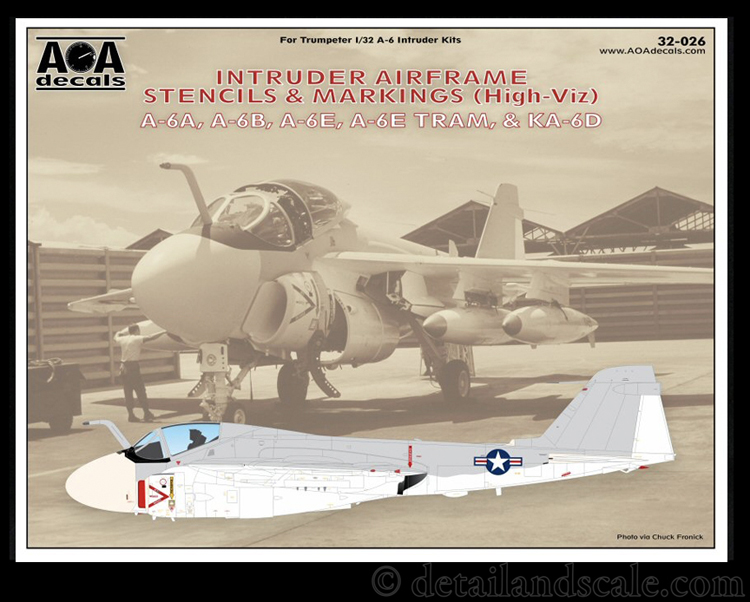 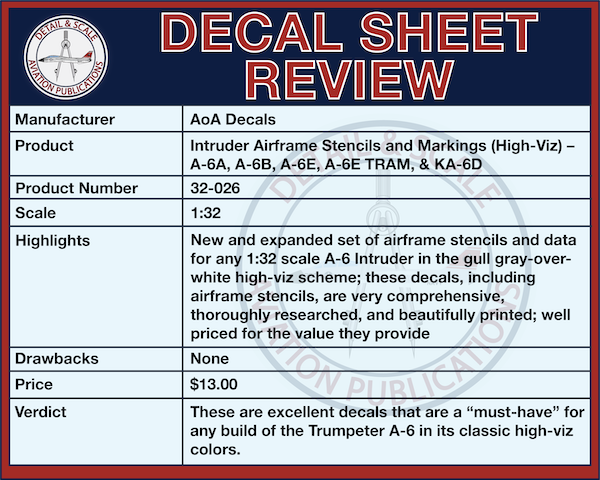 The Grumman A-6 Intruder was one of the true foundations of U.S. Navy power projection spanning its roles in the Cold War, Vietnam War, Operation EL DORADO CANYON, the presumptive Persian Gulf Tanker War, and Operation DESERT STORM.  There were few naval attack jets that could ever aspire to equal Grumman’s “Iron Tadpole.”

A 1:32 scale A-6 kit was long desired by scale modelers, and in 2013, we finally got our wish with the Trumpeter A-6A kit.  That was followed by a 1:32 scale A-6E the next year.  The kit is pretty good, but one area where it falters is in the decal department – especially regarding accurate and complete airframe stencils.

With this in mind, AoA Decals produced a much-needed 1:32 scale A-6 Intruder stencil set in 2015 as their second release.  However, that sheet has long been sold out, and there were a few items that remained to be added.  In late 2018, AoA Decals released a new and expanded stencil set for any high-visibility gull gray-over-white A-6A/B/E and KA-6D scheme.

In this set, which supersedes AoA’s previous sheet, your get a complete set of stencils that cover:

Cartograf printed the decals.  A usual, I would argue Cartograf is the best in the business, with their high-precision print quality, sharpness, vibrancy, and highly restrained printing of carrier film.  Decals are only as good as their design, and these airframe stencils cross over into the category of “breathtaking” to be honest.  Not only are they impressively accurate, but the depth of subject matter expertise held by AoA Decals is very clear.  Intruder fans especially will be pretty enthralled with what they get here, while the less-invested scale modeler will be very impressed.  It’s everything here on the airplane, from the early GRU-5 and later GRU-7 ejection seat stencils to pylons, drop tanks, TRAM sensor markings, every single NO STEP marking, and so forth.  The thorough instructions feature various technical notes and provide a range of insightful observations on A-6 Intruder data markings.

Scale modelers of all backgrounds and skill levels will indeed find them an absolute pleasure to work with when doing any and all high-viz Intruder schemes from the 1960s to the 1980s.  If you’re doing such a build, these decals are a “must-have.”

Many thanks to AoA Decals for the review sample. You can find them on the web at http://www.aoadecals.com and on Facebook at https://www.facebook.com/AOAdecals