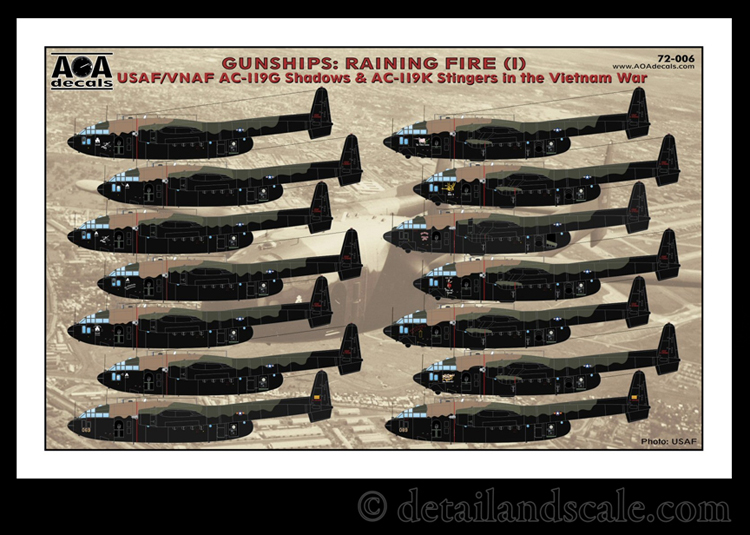 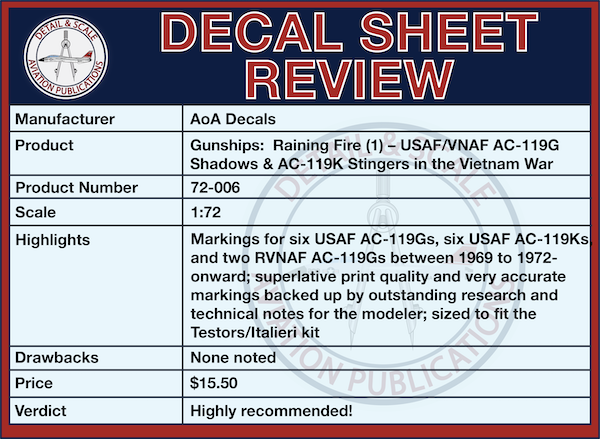 The Vietnam War served to bring about the dawn of the modern age of the gunship.  Initially, the use of high-intensity airborne fire for ground attack and close air support was pioneered by the Douglas AC-47 Spooky.  It was so successful that improved and more lethal gunship configurations were soon developed via modifications of the C-119 Flying Boxcar and C-130 Hercules.

In 1968, 26 C-119G airframes were converted into AC-119Gs and given the callsign “Shadow.”  Another set of 26 C-119Gs were converted into AC-119Ks with a focus on the truck hunting mission over the Ho Chi Minh Trail.  These aircraft were known as “Stingers” in reference to the two M61 Vulcan 20mm cannons they carried in addition to the AC-119G’s four GAU-2/A miniguns.  The AC-119K was also distinguishable by the two underwing GE J85 turbojet engines.  The Shadows and the Stingers flew until the fall of 1972 and the remaining AC-119G and Ks were transferred to the Republic of Vietnam Air Force (RVNAF) and operated until the Fall of Saigon in 1975.

Here, AoA Decals provides what looks to be a first set of planned decal sheets on Vietnam era gunships in 1:72 and 1:144 scales.  Here, we look at the 1:72 scale sheet, sized for the Testors/Italeri AC-119/C-119.  Decals are provided for 14 aircraft:

This decal set covering the AC-119G and K does a great job in capturing the variations of nose art and other markings variations with USAF and VNAF aircraft.  I am particularly biased towards “Black Killer Duck” since that was the airplane co-piloted by master modeler and my dearest of friends and mentors, then-Lt. Frank Baehre (see review photos).

Cartograf printed the decals.  They produce excellent decals and are known for their precision print quality, sharpness, vibrancy, and highly restrained printing of carrier film.  The sheet has all the stencils as well for two complete -119s as well.

As always, AoA’s depth of research and fastidious decal design shines through, especially in the airframe-by-airframe technical and historical notes including some really neat and obscure minutia.  There is also a very thorough set of notes on how to most accurately build an AC-119 from the Testors/Italeri kits.  Pay very close attention to these notes, as the base kit really got a lot of details incorrect or omitted.  There are also a ton of multiple configuration details and other very detailed construction notes.  It’s great, and really great to have such a guide present in a decal sheet set.

These decals just keep further building upon the high standard set by past releases by AoA Decals.  These are top-rate decals and should be an absolute pleasure to work with in representing the AC-119 Gunships from the Vietnam War.

Many thanks to AoA Decals for the review sample.  You can find them on the web at http://www.aoadecals.com/ and on Facebook at https://www.facebook.com/AOAdecals