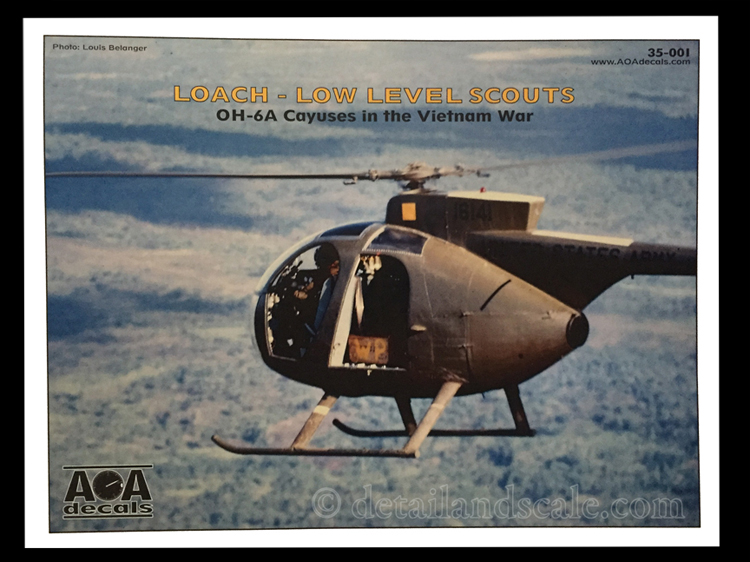 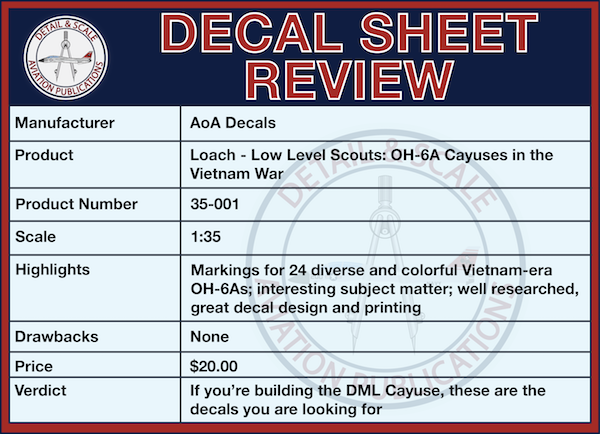 The Hughes (later McDonnell Douglas) OH-6 Cayuse is a single-engine light helicopter that first flew in 1963.  Since its service introduction in 1966, more than 4,700 have been produced and OH-6s have been used in transport, escort, rescue, attack, observation, and espionage roles.  It is more commonly referred to as the Loach, a phonetic pronunciation of LOH (or Light Observation Helicopter) and occasionally one will also hear the nickname Flying Egg or Killer Egg referencing the shape of the fuselage.

The OH-6 proved to be an exceptional design, setting 23 world records in the 1960s for speed, endurance, and climb and which still stand today – including a maximum range of 2,000 miles on a single tank of gas, and a maximum altitude of more than 24,000 feet.  The Loach went straight into the Vietnam War and began to progressively replace the fixed wing O-1 Bird Dog in the FAC role.  Later, OH-6s participated in the failed 1980 OPERATION EAGLE CLAW.  They also participated in the actions in Grenada and Panama, both Gulf Wars, Somalia, and the Balkans.  OH-6s from Task Force 160 also played a key role in escorting oil tankers and attacking Iranian minelayers and gunboats during the Persian Gulf crisis of the late 1980s (for a excellent read on that conflict, I highly recommend the 2009 book Tanker War: America’s First Conflict with Iran, 1987–88 by Lee Allen Zatarian).

This sheet is AoA Decal’s inaugural release in 1:35 scale, and these decals are sized to fit the DML OH-6A kit and cover 24 Loaches:

These markings cover some really eye-catching options, particularly the Loaches with the dayglo orange upper stabilizers, but I’ve got to say the non-standard tan wraparound camouflage scheme on 68-17361 (D Troop 1st Squadron 10th Cavalry Regiment) is my favorite.  This sheet was printed by Cartograf in Italy and these decals are typical of their excellent, industry-leading quality.  The airframe stencils are very fine and even the smallest ones are legible at 1:35 scale.  And speaking of stencils, two sets of complete airframe stencils are included here.  The instructions come on four double-sided pages that are printed sharply and in color, and provide technical notes, stencil placement guides, corrections to the DML kit, and carefully researched details on the various paint schemes.

Many thanks to AoA Decals for the review sample.  You can find them on the web at http://www.aoadecals.com and on Facebook at https://www.facebook.com/AOAdecals.