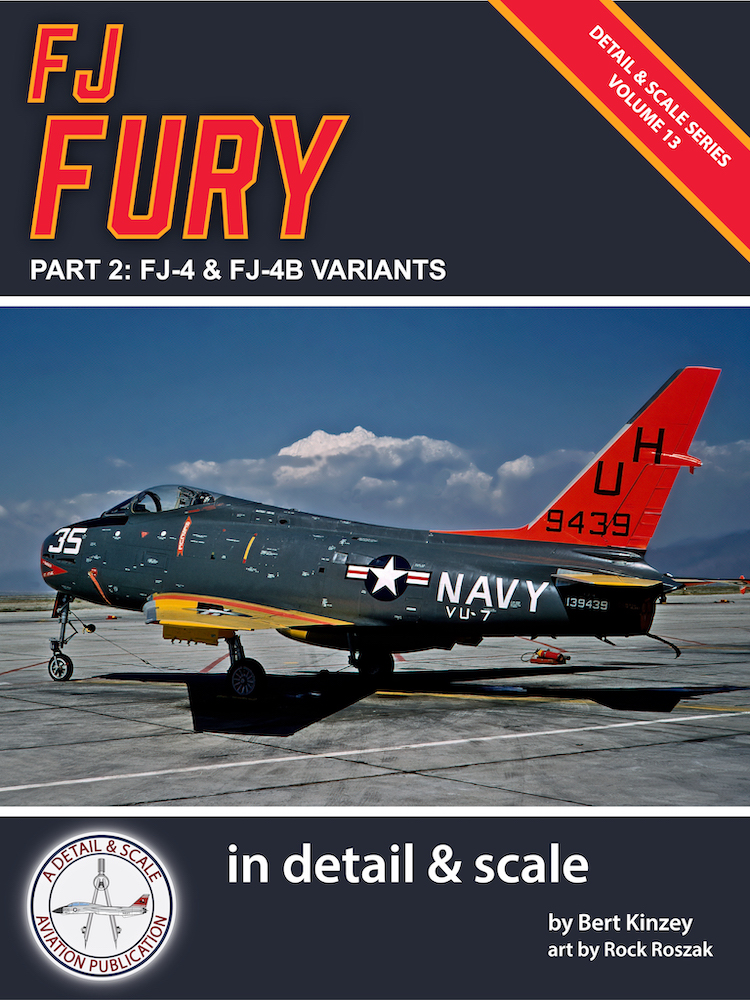 FJ Fury in Detail & Scale, Part 2:  FJ-4 and FJ-4B Variants completes Detail & Scale’s two-book treatment of North American’s iconic early jet fighter flown by the U. S. Navy and Marine Corps.  These were the ultimate variants of the Fury resulting from a second extensive redesign of the aircraft that first bore the name.
The FJ Fury was a major milestone as the Navy developed its early jet fighters for carrier operations.  Moving from the original straight-wing design of the FJ-1, the FJ-2 would become operational with the Marines, and the FJ-3 would become one of the first swept-wing jet fighters to operate successfully from aircraft carriers of the U. S. Navy in large numbers, along with Grumman’s F9F Cougar.  It was an essential step along the way that led to the state-of-the-art supersonic fighters that followed.

FJ Fury in Detail & Scale, Part 2: FJ-4 and FJ-4B Variants continues our coverage with a detailed look at the last two Fury variants which incorporated major design changes over the previous versions.  The FJ-4 served primarily with the Marines as a day fighter, while the FJ-4B was modified to become an effective ground attack aircraft that was assigned to attack squadrons with both the Navy and the Marines.  Together, these two books provide the most extensive and detailed look at the Fury series of jet fighters ever published.

The first chapter begins with a brief summary of the development of the early Fury variants covered in Part 1, then moves on to outlining the major redesign that resulted in the FJ-4 and FJ-4B.  This is followed by the Fury Variants chapter which takes a closer look at the FJ-4 and FJ-4B in separate sections, each discussing their features, capabilities, and their service with both the Navy and Marines.  Special emphasis is placed on explaining how the FJ-4 was modified to become the FJ-4B and serve as an effective fighter-bomber with far greater capabilities than the FJ-4 in employing ground attack ordnance including both conventional and nuclear weapons as well as the Sidewinder air-to-air and Bullpup air-to-surface guided missiles.  This allowed the FJ-4B to serve as a carrier-based jet attack aircraft as the Navy waited for the development and introduction into service of its first purpose designed jet powered light attack aircraft in the form of the Douglas A4D Skyhawk.  Photographs and art profiles illustrate the markings used by many of the squadrons that operated each variant.  The experimental FJ-4F is also covered in a separate section.

The Fury Details chapter is next, and this hallmark of the Detail & Scale Series of publications covers the physical details and features of the FJ-4 and FJ-4B extensively with more than 120 photographs and illustrations that are divided into eight different sections.  More than ninety percent of the photographs in the chapter were taken specifically for this publication and the overwhelming majority are in color.

Concluding the book is our usual Modelers Section that includes extensive and objective reviews of the scale model kits of FJ-4s and FJ-4Bs ranging from 1/144th scale to 1/32nd scale.  General and detail photographs and a comprehensive text provide the scale modeler with valuable information about building and correcting the existing kits to produce the most accurate scale models of these two Fury variants.