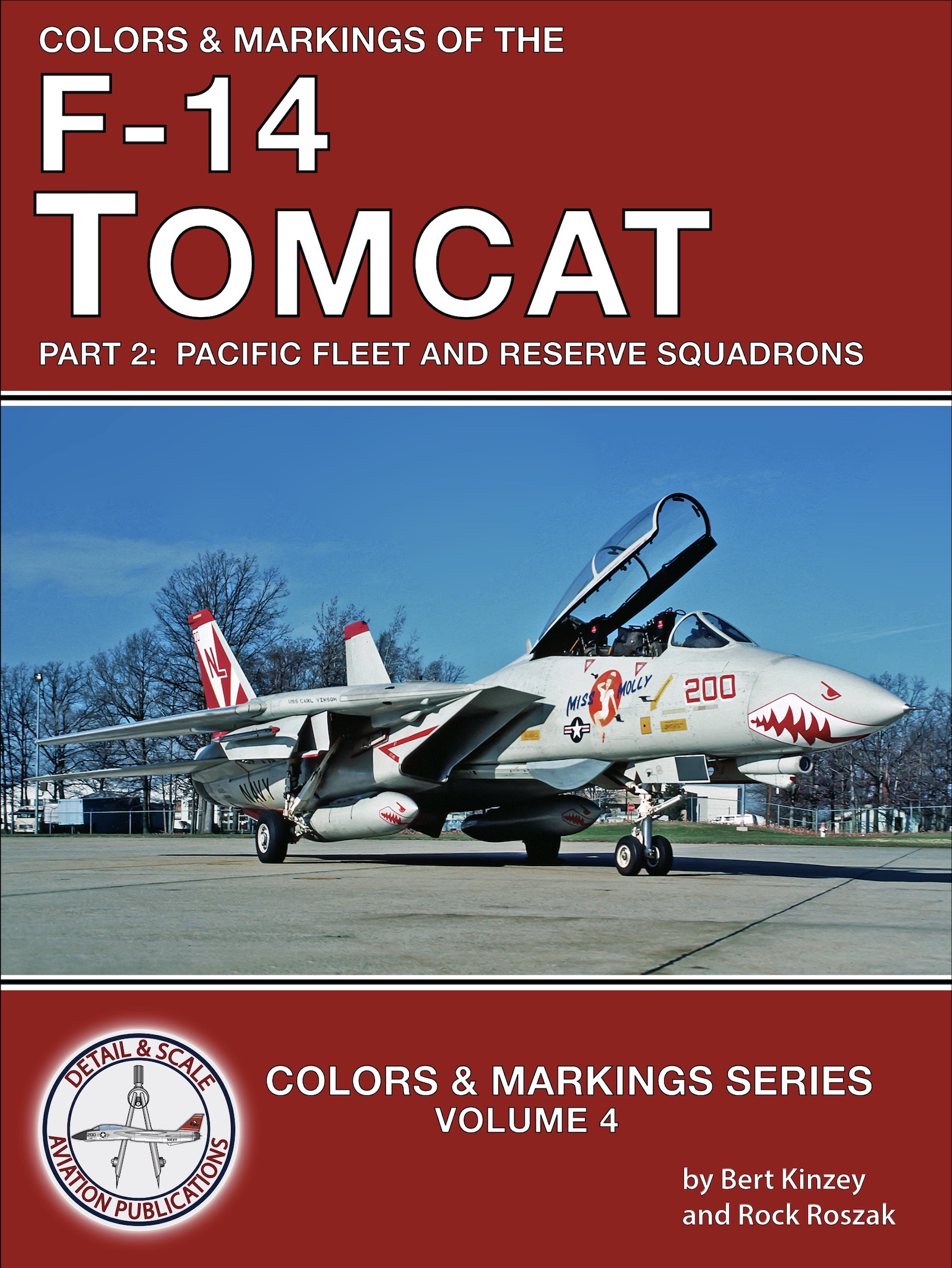 The Grumman F-14 Tomcat was one of the most iconic naval fighter aircraft of the latter half of the twentieth century.  Colors & Markings of the F-14 Tomcat, Part 2:  Pacific Fleet and Reserve Squadrons is a comprehensive look at the paint schemes and unit markings used by operational F-14 squadrons assigned to the Pacific Fleet from 1972 through 2004.

The book covers the fifteen active Pacific Fleet fighter squadrons and the two Naval Reserve units that flew the Tomcat for over thirty years.  Beginning in 1972 when the F-14 entered service with VF-124 “Gunfighters,” the Tomcat distinguished itself, first as an outstanding fighter and fleet defense aircraft, and later as a strike aircraft.

This book follows the first book in the trilogy, Colors & Markings of the F-14 Tomcat, Part 1:  Atlantic Fleet and Reserve Squadrons, which covers the fifteen active Atlantic Fleet fighter squadrons and the two Naval Reserve units that flew the Tomcat while assigned to the Atlantic Fleet.    The third and final book in the series, Colors & Markings of the F-14 Tomcat, Part 3:  Prototypes, Test, Evaluation, and Adversary Aircraft, will follow and it will cover the Grumman prototypes, the test and evaluation squadrons, and the facilities that flew the Tomcat.  Also included will be Tomcats that flew in the ACM adversary role and those flown by NASA.  Part 3 will also include an appendix that covers the official paint schemes used on Navy Tomcats during there operational service, and an additional appendix that will go into considerable detail to illustrate the markings and standard stenciling used on the F-14.

Each of the seventeen fighter squadrons are covered by a short history of their years flying the Tomcat, including both operational highlights and a good look at the squadron markings with which each unit adorned their aircraft.  How those markings evolved over time as the Navy moved from the Light Gull Gray over Insignia White paint scheme, to the overall Light Gull Gray scheme, and finally to the group of very low visibility exteriors that were classified as tactical schemes is illustrated for each squadron with color photographs and art profiles.

The move from the gray over white scheme, which featured some of the most colorful aircraft markings ever displayed on U. S. Navy aircraft, to the lower visibility schemes led to a much more drab and understated look for the F-14.  Yet even throughout the latter stages of its career, special aircraft in each unit, including the X00-coded Tomcat assigned to the Carrier Air Wing Commander (CAG) or the X01-coded aircraft assigned to the squadron commander (CO), allowed the display of colorful squadron markings to continue.  Each unit section has a selection of photographs that chronicle the unit marking evolution throughout the years it flew the F-14.