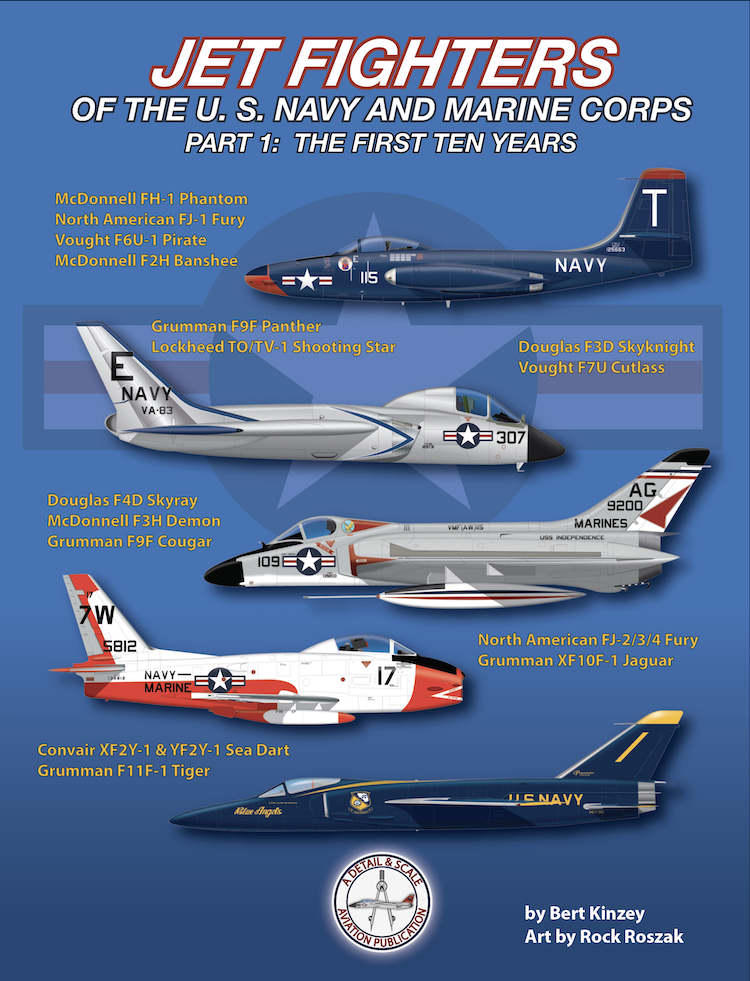 Jet Fighters of the U. S. Navy and Marine Corps is a two-book series that describes the entire history of American Naval jet fighters, from the very beginning when many thought that the onset of military jets would mean the end of naval carrier-based aviation, to today when the fifth-generation stealth jet F-35B/C Lightning II has begun its service with both the Navy and Marine Corps. Both volumes will cover every jet fighter that has ever been produced for the Navy and the Marine Corps, and not only those that were used operationally, but even the aircraft that only made it to the flying prototype stage are included. Also covered by the books is the history of how American aircraft carriers evolved from the ESSEX class ships that won World War II with propeller-driven aircraft to the mighty supercarriers of today.

In this first book, Jet Fighters of the U. S. Navy and Marine Corps, Part 1: The First Ten Years, author Bert Kinzey describes the first and second generation jet fighters that came on the scene at the end of or shortly after World War II. These jet fighters made their first flights between 1945 and 1954, and the book covers fifteen aircraft arranged according to the chronological order of the date of their first flight.

Features of Detail & Scale’s newest publication, Jet Fighters of the U. S. Navy and Marine Corps, Part 1: The First Ten Years include:

The aircraft covered in Part 1 begin with the McDonnell FH-1 Phantom and go through the other first generation fighters, including the North American FJ-1 Fury, Vought F6U Pirate, McDonnell F2H Banshee, Grumman F9F Panther, Lockheed TO-1 & TV-1 Shooting Star, and the Douglas F3D Skyknight.  All seven of these fighters were straight-wing designs that followed the hallmarks of fighter aviation in the propeller age.  It was with the second generation of jet fighters that the first steps in improved aeronautical design moved the Navy into an area where significant performance improvements were realized, though problems with engine and weapons development continued provide challenges to establishing naval jet aviation on par with land based fighters.  The second generation fighters covered by the book include the Vought F7U Cutlass, Douglas F4D Skyray, McDonnell F3H Demon, Grumman F9F Cougar, American FJ-2/3/4 Fury, Grumman XF-10F Jaguar, Convair XF2Y-1 & YF2Y-1 Sea Dart, and the Grumman F11F Tiger.

Jet Fighters of the U. S. Navy and Marine Corps, Part 1:  The First Ten Yearscovers the first ten years of American naval jet fighter aviation in a way that no previous work ever has.  The book is profusely illustrated with photographs and artwork.  In addition to the general photographs that illustrate the different variants of the aircraft, detail photos that show cockpit interiors and other details are included.  Specific attention is paid to providing photographs and information on the jet engines used to power the aircraft, and this allows the reader to see how jet engines developed from the small, low-thrust, and often problematic early designs to the more powerful and efficient engines that came later.  This new publication is a tremendous follow-on to Detail & Scale’s best selling book U. S. Navy and Marine Carrier-Based Aircraft of World War II, which covered the fourteen fighters and eleven dive and torpedo bombers of the United States that were either operational or reached the flying prototype state during the Second World War.

Jet Fighters of the U. S. Navy and Marine Corps, Part 1:  The First Ten Yearsfeatures 113 pages, 220 high resolution photographs, 115 of which are in color, and 16 full color profiles.