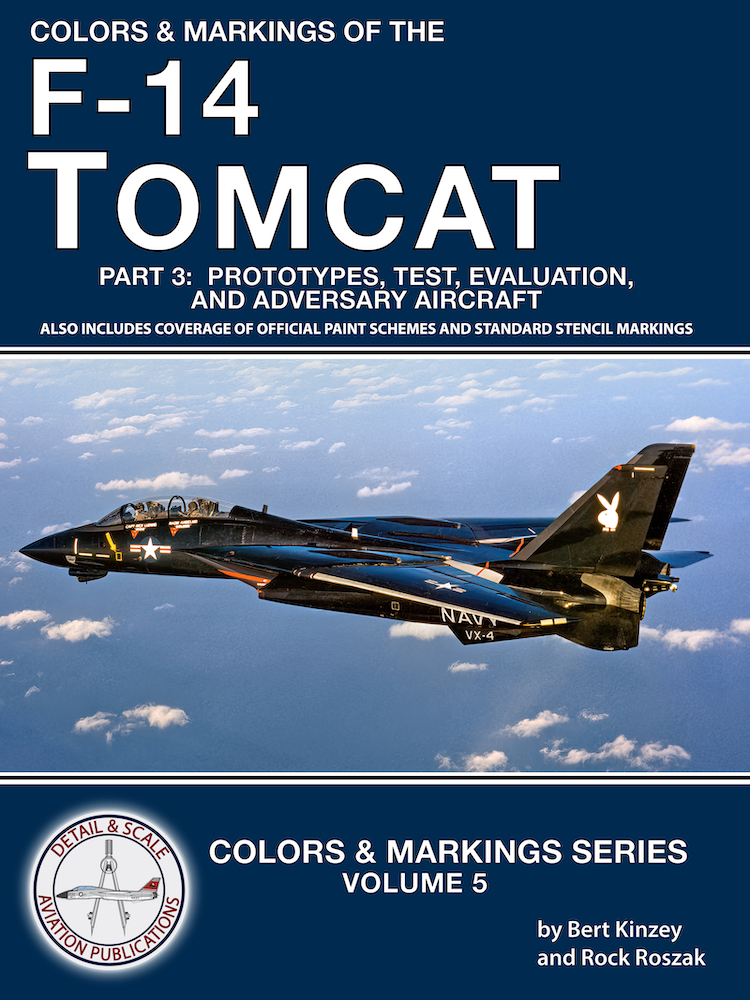 The detailed coverage starts at the beginning of the production line.  After approval of the full-scale mockup of the F-14, the first twelve aircraft off the production line were prototype and pre-production aircraft.  Some of these aircraft remained at Grumman for a period of time, some went to various Navy facilities and test units, but all of them served to evaluate the Tomcat and prove out the aircraft’s systems, modifications, and improvements.

Next is coverage of the units that flew the F-14 in the adversary role.  The Tomcat attained a measure of fame in the movie TOPGUN, and for the first almost twenty years of its life it was the primary platform flown by students going through the Naval Fighter Weapons School (NFWS).  With the advent of the Gulf War in 1991, and given both the fact that Iran operated the F-14 and the emerging need to simulate the threat of the larger Soviet fighters then operational, TOPGUN acquired several Tomcats.  The F-14s remained active in the adversary role for the next decade, even after NFWS moved to Fallon NAS, Nevada, and became a part of the Naval Strike Warfare Center that later became the Naval Strike & Air Warfare Center (NSAWC).

The book then takes a look at the test and evaluation units and facilities that operated the F-14.  On the Atlantic coast this included the Naval Air Test Center at NAS Patuxent River, Maryland, including the “Salty Dogs” of VX-23, the center’s naval strike aircraft test squadron.  On the Pacific coast, coverage is provided for the Naval Missile Center, Pacific Missile Test Center, the Naval Air Warfare Center, the Weapons Test Squadron, and the test and evaluation squadrons VX-30, VX-4, and VX-9, with special emphasis on the Vandy 1 all-black aircraft.  This is followed by a look at the two F-14s flown by NASA as special test aircraft.

Much of the second half of the book is devoted to two appendices.  The first covers the official paint schemes used on the F-14 over its thirty plus years of operations:  the Gloss Light Gull Gray over Gloss Insignia White scheme, the overall Light Gull Gray scheme that came into being in 1978, and the various tactical schemes, that were all part of the move to lower visibility requirements.  Each section includes paint diagrams and Federal Standard paint information, and each contains not only the details of the scheme, but a gallery of photographs that illustrate the various schemes as used by fighter squadrons assigned to both the Atlantic and Pacific fleets.

The second appendix covers Tomcat stencils and standard markings.  Here, a series of photographs details what standard safety and informational markings were applied to the F-14 and how they varied over time as the paint schemes changed to reflect the overall move to lower visual signatures.  Finally, in-depth coverage is given to the stencil markings used extensively on the initial production aircraft as provided by the governing manual NAVAIR 01-F14AAA-3-2.

Our EU customers cal also order our books from THE48ERS.COM