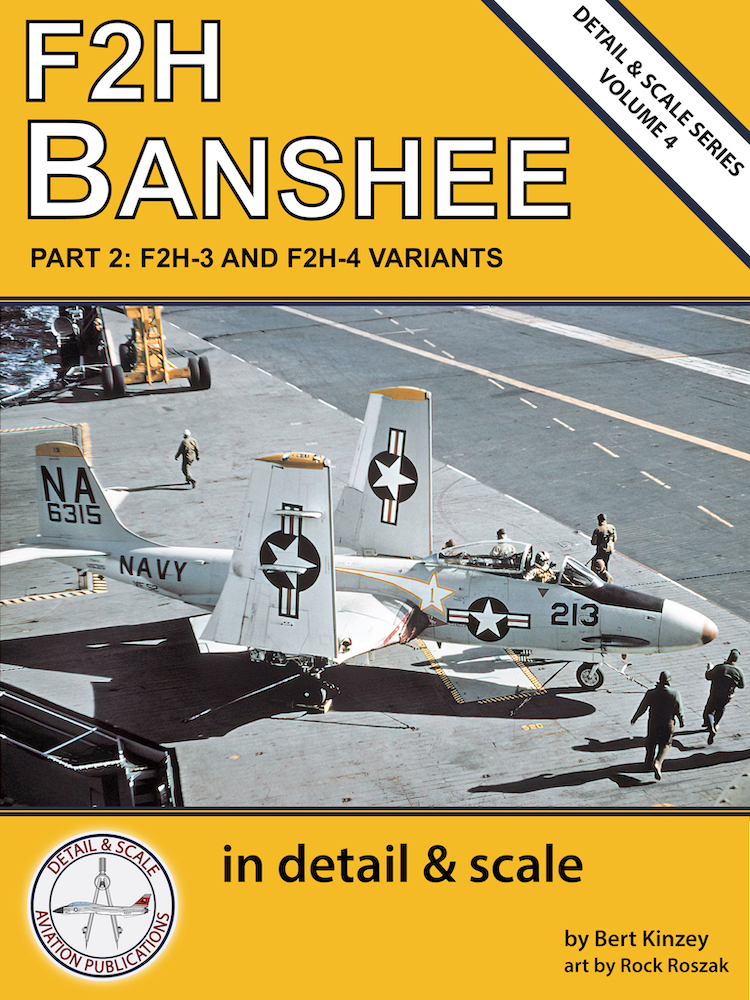 The McDonnell F2H Banshee holds a unique place in the annals of United States naval aviation. Like its contemporaries in the North American FJ Fury and the Grumman F9F Panther, the original design evolved into a significantly different aircraft.

In 2016, Detail & Scale published F2H Banshee in Detail & Scale, Part 1: Prototypes Through F2H-2 Variants. That book covered the early Banshee variants that, alongside Grumman F9F Panthers, were among the first jet fighters to serve in large numbers and to see combat with the U. S. Navy and Marines. F2H-2 fighters and F2H-2P photo-reconnaissance Banshees were used extensively by both services during the Korean War. This new title in the Detail & Scale Series picks up where that book left off and covers the larger F2H-3 and F2H-4 Banshees that were developed from the earlier Banshee variants, primarily to be all-weather interceptors. Because they were larger in size than the previous variants, the F2H-3 and F2H-4 became known as “Big Banshees,” or more commonly “Big Banjos.”

Although the F2H-3 and F2H-4 were based on the original design and shared many commonalities with their predecessors on the McDonnell production lines, there were noticeable and important differences, both physical and operational. This new title discusses these differences in considerable detail. We begin with a Developmental History that traces how the all-weather Banshees were designed, developed, and produced to fill a pressing need for a jet fighter that could perform the fleet defense mission in any kind of weather, day or night. Changes made to the airframe and features that were added are discussed and illustrated.

The second chapter focuses specifically on the F2H-3 and F2H-4 in separate sections, explaining the major difference between the two variants and covering the squadrons to which they were assigned. A third section in the chapter is devoted to the Canadian F2H-3s flown by the Royal Canadian Navy, the only non-U. S. operator of any Banshee variant. Numerous photographs and art profiles illustrate the markings used by many of the squadrons that flew the “Big Banshees.”

The use of several different paint schemes on the F2H-3 and F2H-4 is a very interesting story itself, and it involves the Navy’s experiment with carrier-based jet fighters in a natural metal finish. This is covered in the third chapter, and the reasons why the multiple schemes were developed, tried, and used operationally are explained and illustrated with both photographs and artwork. The Canadian paint scheme is also covered in this chapter.

As is the case with all titles in the Detail & Scale Series of publications, the details of the aircraft are the primary focus. The Banshee Details chapter includes more than 120 photographs and illustrations covering the aircraft extensively inside and out. Among the nine different sections of this chapter is one on the weapons certified for use on the F2H-3 and F2H-4 as well as the under-wing stations on which they were carried. A large majority of the photographs in the Banshee Details chapter were taken specifically for this publication.

The book concludes with a Modelers Section that reviews and illustrates the model kits of the “Big Banshee” that are available to the scale modeler.